One thing with all the multiple Olympic channels is that you can get watch sports and get drama on more than one channel, of your choosing.

Earlier this evening I managed to have simultaneous drama in both the North Greenwich Arena and the Excel.

First up in the North Greenwich Arena the GB men's gymnastics team were in contention for a medal. Ok it wasn't gold as China had that sown up. But we had a chance for bronze. On the last rotation GB were on floor, chasing Ukraine on rings, meanwhile the Japanese were doing all they could to secure silver on pommel horse.

It was nip and tuck on that last piece as the three were going second on the various apparatus. In the end Kristian Thomas up last scored 15.433 to give GB a lead in the floor with 46.132 which was enough to lift them over Ukraine who only managed 45.699. It was enough to secure the GB a medal, but then the last Japanese gymnast Kohei  Uchimura had a terrible dismount and was initially awarded 13.466 which dropped them to fourth. Out of the medals but there was an appeal and that was corrected to 14.166 as the score for difficulty wasn't awarded as he did actually try and execute a dismount an landed on his feet if a little messed up in getting there.

So the British held silver for only ten minutes as the last pommel performance was reviewed. But 100 years on since the last time the British men's team medaled and then rope climbing and drill were part of the gymnastics discipline.

Meanwhile, simultaneously, there was drama in the women's épée semi-final. Britta Heidemann (GER) and Shin A Lam (KOR). It was a very close bout which involved a number of double hits. In épée hits within 0.04 secs of each other count as a hit for each fencer to allow for inaccuracy in the equipment. It was 5 all at the end of the normal time, then it went to sudden death for 1 minute. In fencing one fencer has the priority in sudden death, meaning that the other has to score, Shin who had been fighting defensively for the last 2 minutes of normal time was given priority.

In the final second there were two double hits. During sudden death double hits do not count for either fencer. However, before the fight was resumed the clock which still showed one second went to zero. The referee called for it to be reset, to a complaint from the Korea coach. But then when Heidemann scored another hit she was deemed the winner. There was another protest from the Koreans, but all the fencing gathered and the clock was still showing 1 second and the score still 5-5.

Update apparently there was a technical infringement by Shin in that last second and she received a yellow card, which meant that she could not win on an infringement so the clock was reset from the zero.

At that point both fencers waited on the piste, because if they were to move off it the result would have been accepted. After about 30 minutes of deliberation the point was finally awarded to the German.

Shin stayed where she was as her coach launched appeals on her behave. But finally after over an hour of sitting there waiting, an official came up to tell her the decision had been made and tried to escort her off. Eventually the head of the international federation himself came up to tell her if she didn't come off she would be black carded, the equivalent of a black flag in F1 but which would exclude her from the bronze medal match, if she wanted to take part in it. Shin was finally escorted away from the piste distraught but to a standing ovation of those who were still waiting for the medal fights who had been very supportive of her throughout. 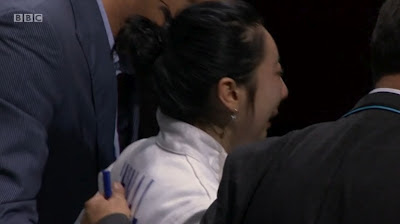 Update After an hour and half between the last hit being made nad her leaving the piste Shin seemed to be an emotional wreck. She did however reappear for the bronze medal match. She scored the first hit against the world number 1 China's Sun Yujie, and the Excel erupted. She scored another to take a 2-0 lead. At the end of the first 3 minute period she led 5-3 (after 2 doubles).

During the second period Sun brought it to 7-7, before Shin started to lift her game and took it to 9-7 only for Sun to bring it back to 9-9. Which with 30 seconds to go was where the attacks ended for the second period.

The first hit of the third period went to Sun. There there was a double hit, which wasn't helpful to Shin,. But she did strike next to bring it to 11 all with just over 2 minutes left. Then Shin went for an attack but lost the hit to the counter. Sun then scored with 90 second remaining. With 45 seconds remaining Shin went down low but missed and Sun scored to take her 14-11 leaving her requiring just one more hit. Sun then scored one final hit to take bronze. But the biggest cheer went up for the valiant fourth placed fencer who had stolen the hearts of the Excel spectators.

Further update Heidemann's gold medal match went to a sudden death and she had the priority this time. But Yana Shemyakina (UKR) managed to get the winning score countering a thrusting move from Heidemann.
Posted by Stephen Glenn at 20:10