So yesterday saw another flat stage and another that saw a crash that decimated the main field. Unlike the majority of them in recent days it did happen well outside the 3km point but close enough to the finish at about 25km that the peleton was in full pursuit of the breakaway that real time gaps opened out.

According to Tweets by Mark Cavendish bikes were flying around him during the crash. But probably because the support vehicles couldn't get around it a puncture just after it meant he had to cycle for 3km with a flat tyre, meaning that for a second time this week he was present for the sprint at the line. According to fellow Brit David Millar it is "the worse crash I've been involved in," leaving his Garmin-Sharp team leader the Giro d'Italia leader Ryder Hesjedal, who did manage to finish 13'24" down, so beaten up that he is a doubtful starter today. Also on that team Tom Danielson abandoned and Johann van Summeran couldn't hold on to the autobus and trailed in last in 16'12".

Other abandons on the road were Wouter Poels (VCD), who was a was he wasn't he on race radio, Davide Vigano (LAM) and Mikel Astarloza (EUS). Update it has been announced this morning that Hesjedal will not start. Also Robbie Hunter (Radioshack-Nissan), Hubert DuPong (AG2R-La Mondiale) and Maarten Wynants (Rabobank). Hunter had stress fractures to vertebrae and Wynants a punctured lung! Anthony Delaplace (Saur-Sojason) started today's stage but withdrew within the first 50km of today's racing.

At the line Peter Sagan did take the honours for the third time already this Tour, but André Greipel managed second after sufferering a dislocated shoulder in a crash earlier at 35km into the day, before crashing again at 50km. There was a time gap after the first 9 to the line which meant some of the GC contenders did lose 4 seconds on the day, but the gap for Cadel Evans (BMC), Bradley Wiggins (SKY), Denis Menchov (KAT) and Vincenzo Nibali (LIQ) was nothing compared to:
With so many walking wounded at the end of the day it will be interesting to see if there are any others who do not start today's stage, the field has already been reduced to 190 riders.

Today's stage may well see the polka dot jersey ripped off the shoulders of Michael Morkov (STB) because we are going up hill, and finish on a first category climb to the ski station of La Planche des Belles Filles. The climb is new to the Tour and here is a brief preview of what today holds. 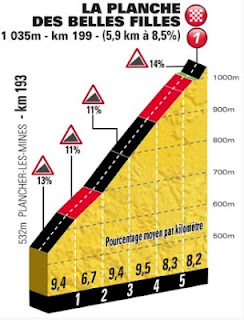 With so many of the GC riders caught up in the crash yesterday the final climb may well be a true test for some of the knocks they may have received yesterday and those that have so far stayed on their bikes and merely been held up in crashes or Evans who has appeared immune thus far may well be able to press for some advantage this afternoon.

The intermediate sprint comes  Gérardmer 103.5km into today's stage which is before the going gets too tough for the sprinters, even though they have been climb. But immediately after that at 112km comes the first to today's two category 3 climbs the Col de Grosse Pierre which is 3.1km long with an average gradient of 6.4%. At 150.5km there is an identikit profile to Col du Mont de Fourche, only it has a lower altitude.

Which leads into the first of the big mountains of Le Tour and with a kick at the end and 20 climbing points on offer the winner will pull on the Polka Dots at the end of the day. But the profile of 5.9km and an average gradient of 8.5 doesn't tell you everything. there are four parts in excess of 10% and even getting towards 22% in part. If will really be sorting out the climbers and serious GC contenders today. The yellow jersey should even change wearer, but who will be pulling it on. Wiggins can afford to sit and watch as others eek out a small advantage, or if he is ready to dominate he may well stay with them all to the end or even try and open a few seconds.  Cadel Evans is just 10 seconds back but there are other climbers who are further down the GC by a few seconds who are not long term threats who may be allowed to go while the leaders watch each other.


We shall have to see what today brings.
Posted by Stephen Glenn at 08:21