The Millennium Olympics were as keenly contested as were the the centenary Games four years earlier.

In the end the five candidate cites were Beijing in China, 1936 Hosts Berlin, Istanbul (a candidate city for 2020), Manchester (a 1996 candidate city) and Sydney (the third candidate bid from Australia following Melbourne and Brisbane for 1992 and 1996).

The first round showed that it was a battle between Beijing and Sydney on 32 and 30 votes. Manchester managed 11, Berlin 9 and Istanbul 7. With Istanbul eliminated Manchester gained 2 more votes with Beijing gaining the other 5 to take it 7 votes clear to 37. Sydney did gain 7 when Berlin were knocked out, with Beijing gaining another 3 and Manchester losing 2. So Manchester were removed from consideration and it came down to the final two.

Sydney gained the most and edged it 45 votes to 43 after the final round.

The teams of the two Koreas entered the stadium with one competitor for each carrying a flag that showed the map of the Korean peninsula  in blue as a unified presence in the opening ceremony. But they were to go on and compete as separate nations.

It was also the Games to mark the centenary of women's participation in the Games and for the first time women competed in modern pentathlon, weightlifting, water polo, and the newly introduced sports of taekwondo and triathlon.

Strange drama by the Opera House

The iconic Sydney Opera House and Harbour Bridge were to be the backdrop for the newest event to the Games, Triathlon. The women's event took place on the first day of competition with the men's taking place the following day.

In the women's event the first women the climb out of the harbour after the swim was the American Sheila Taormina who was a full 35 seconds clear after just 19 minutes of swimming. However, she was to lose time on the cycling and run.

An Australian from the Fairfield suburb of the host city Michellie Jones looked to have the inaugural gold medal won as she aprroached the finish but Switzerland's Brigitte McMahon had other ideas and surged past the local favourite in the final run in to win by a mere 2.03 seconds. He overall time of 2:00:40.52 was to stand as the World Record time over the Olympic distance until 2008. The men's race the following day proved just as dramatic.

Aussie Craig Walton was the first out of the water followed closely by Great Britain's five time world champion Simon Lessing. Lessing also held the world record of 1:39:50 so was expected to be up with the contenders. Walton and Lessing were still up there after the cycle but started losing time and places on the run.

With 250m to do German Stephan Vuckovic had a 10m lead over Canadian Simon Whitfield. But the Canadian put in a burst to close the gap and zoom past the tiring German taking the line in 1:48:24.02 over eight minutes slower than Lessing's world record. Lessing ended up 9th and Walton 27th after both men faded in the run.

In Vietnam they were silver

The introduction of Taekwondo lead to another Olympic first; the first medal for Vietnam.

It came in the women's 49-57kg category when Tran Hieu Ngan (in red left) lost out in the final to South Korea's Jung Jae-Eun. It had been Vietnam's 11th participation at the Games.

South Korea were secure two more golds across the 8 events, four for each gender. The others went to Greece, USA, Cuba, Australia and China. It was also the first time that Chinese Taipei picked up two medals in the same event with bronzes in the men's -58kg and women's -49kg classes.

There was great success for Australia in the pool at both the Olympics and Paralympics but not one of their swimmers, even the 17 year old Ian Thorpe could compete with the achievement of Siobhan Paton. Also 17 years old she was to win a total of six Gold medals setting 9 world records in the process.

She was competing the S14 class for athletes of intellectual disability. It was a class that was to be disbanded after Sydney as a result of the discovering that the gold medal winning Spanish S14 Basketball team played members who did not have an IQ of less than 70 the requirements for participation in the class. The result was that honest competitors like Siobhan have not been able to compete again in the Paralympics.

Shoot out with actual bullets 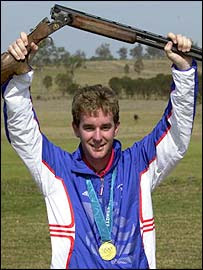 The double trap shooting competition also proved to be a matter of heartache for the hosts. The 1996 Olympic champion, when the event first appeared, Russell Mark set an Olympic record score of 143 in the Qualifying rounds, 2 shots clear of three of his rivals.

However, in the final he shot less accurately than two of his rivals with only 44 out of 50 he scored one less than Kuwait's Fehaid Al Deehani, who took bronze and Two less than Britain's Richard Faulds.

The result was a shoot out. Mark was drawn to shoot first. He hit only one of his two targets, but Faulds could do no better missing one of his as well.

For the second time the two men faces two clays. Once more Mark missed one of his. But for Faulds there was no mistake, he took both of his and won Britain's first shooting medal since 1988. Once again there is twelve year gap since the last gold for Britain in shooting and Faulds is going to be taking part at the Royal Artillery Barracks hoping once again to end a 12 year drought.

Fortunately Faulds didn't take his rifle down to the rowing lake to fulfill the request of Steve Redgrave who after his comments in 1996 was not just seen in a boat but racing it to another gold.

Boccia is a game akin to bowls or boules designed to be played by participants with Cerebral Palsy as part of the Paralympic programme, it now has classes for participants lacking other motor skills. It is one of the three events at the Paralympics that has no equivalent sport in the Olympics.

However, it is a game of skill as the opponents try and place their balls nearer to the jack than their opponents. However, unlike in bowls once the first two bowls one for each side are played the team who are not closest to the jack throw bowls to get closer or push out the shot bowl. Until such time as one team runs out of bowls then the other team use their remaining bowls to try and improve their shot count. It has been part of the Paralympic programme since 1984.

But in 2000 Ireland added to their one gold in this event in 1988 with two more. In the  BC1 Mixed Individual Gabriel Shelly (pictured) took the honours, while in mixed pairs BC3 Margaret Grant and John Cronin added another. Britain also took a gold in the BC2 Mixed Individual through Nigel Murray.

There was a lot of pressure on Australia's poster girl for these Games. Not only did Cathy Freeman have to set fire to water in the Opening Ceremony, which left her huddling for warmth with her fellow torch bearers looking cold and wet. She was expected to lift gold in the 400m.

As a symbol of all of Australia its modernity and its aboriginal past she was bearing the hopes of the nation. Having come second in Atlanta but winning the 1997 and 99 World Championships she was expected to be a golden member of the team, especially once Marie-José Pérec her great rival from France and the Olympic champion left the Games after what she called harassment from strangers.

On Day eleven she entered the Olympic Stadium this time under the full glare of the world's cameras rather than under cover of darkness as in the opening ceremony. One thing that was in common on both days was her full body suit.

She had eased through the 2 rounds of heats and semis. Winning all her races and being fastest overall in the last 2 rounds.

In the end she did not disappoint and won clearly as can be seen. For her lap of honour taking both the flag of Australia and the Aboriginal flag

The Race with no winner 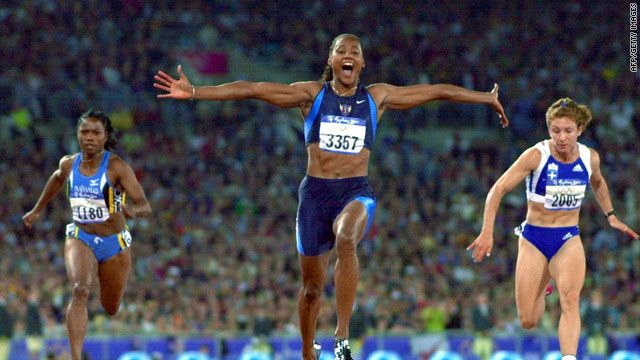 Yes there may well have been a women who crossed the line first in the women's 100m but the records today show that there were two silver medals awarded.

The reason was Marion Jones who was later stripped of her medals for winning the 100m, 200m and 4x100m and 4x400m relays after she confessed to taking drugs prior to these Games in 2007. However, in second place in the race had been Ekaterini Thanou (on the right) who infamously on the eve of the 2004 Games falsified details of a traffic accident as a reason for missing a drugs test along with her training partner.

The IOC therefore didn't feel confident in promoting her to gold but instead awarded a second silver to Tanya Lawrence of Jamaica who had crossed the line 0.06 seconds after Thanou and raised Merlene Ottey to bronze.

See also my full list of posts about past Olympics
Posted by Stephen Glenn at 17:00