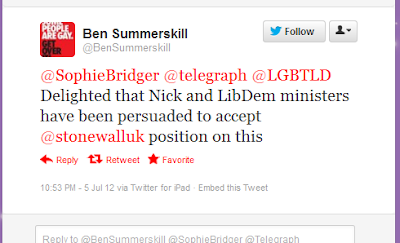 Even more ironically he tweeted it as I was pursuing Lib Dem policy on Equal Marriage in Northern Ireland, part of the UK which Stonewall UK (see Twitter name above) fails to operate in! Meeting with one of my MLAs about his plans to get something done in Stormont and then the first meeting of Equal Marriage Northern Ireland (at which there was no Stonewall presence but Lib Dems were present).

I first helped bring about the equal marriage policy for the Scottish Lib Dems in Scotland in  Spring 2010 which covered civil and religious same sex marriage. This was before the Federal Party debated and brought about a similar motion and policy in the Autumn and Summerskill at the LGBT+ fringe meeting denied that equal marriage should be pursued saying that it was too expensive.

In follow up tweets Mr Summerskill said that Stonewall were advocated religious same-sex marriage in September 2010. Well looking through my blog posts they only came out for equal marriage in October and then said:

"We seek to secure marriage for gay people as a civil vehicle on the same basis as heterosexual marriage, available in a registry office but without a mandate on religious organisations to celebrate it.

"We seek to retain civil partnerships for lesbian and gay people recognising their special and unique status."

Maybe Ben would care to enlighten me where that mentions religious marriage. In the year since we officially passed policy Lynne Featherstone worked hard to get Equal Marriage unto the agenda. Sadly it wasn't in the Coalition Agreement so she had to battle hard to get what she could. To within one year secure any consultation on this issue is rapid when you look in terms of other LGBT legislation down through the years. However, on the evening that she announced it at Conference I asked her why the religious element wasn't included and the reason was that it was all she could get out of the Conservatives at the time. But she urged those of us who wanted more to say so as part of the consultation, which of course I have done.

Summerskill is on record of saying people shouldn't play political football with the subject of equal marriage. So I'm not going to do that. Merely remind him to look at the chronology of events. If in Northern Ireland we can have all interested parties looking to work together to achieve this without political point scoring I'd like to think that Stonewall can do the same. Time to move on and stop the bickering about who's following who let's all aim to cross the line we still haven't quite made it to yet.
Posted by Stephen Glenn at 15:46