Yesterday may have been a rest day for the majority of the Tour but it means something more to certain riders.

Tony Martin of Omega Pharma Quickstep the World Time Trail Champion made it as far as the Time Trail with a fractured wrist. He has however decided that three weeks rest ahead of the Olympics are what he needs if he is to challenge Bradley Wiggins and Fabian Cancellera in London. So he has abandoned this year's Tour. 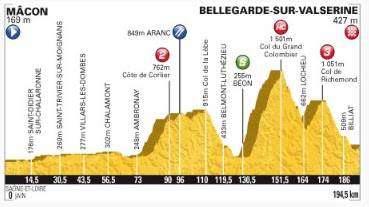 Meanwhile elsewhere Remy di Gregorio from Cofidis, but formerly of Astana. He was arrested and taken from the team hotel in Mâcon to police station in Marseille for questioning about trying to use banned substances to improve his performance. His team where swift to suspend the rider which will become permanent exclusion from the team if the allegations are proven and the Tour officials are looking at this as an isolated incident allowing Cofidis to carry on.

Today's stage is 194km and sees the first Hors Catégorie climb of the race. The first 73km are spent rolling towards the Alps, before the race heads uphill. Then we have the second category Côte de Corlier which is 6.4km long at 5.5%, before the day's feed station then descent into the valley where the intermediate sprint is. 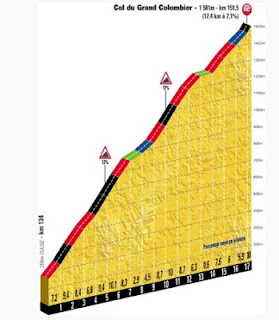 But next up is the 17.4km climb of the Col du Grand Colombier at 7.1% making its debut on the Tour. However, this is no stranger to race leaders Bradley Wiggins (SKY) and Cadel Evans (BMC) they were together at Culoz at the foot of this climb before this year, on stage 5 of the Critérium du Dauphiné, the day after Evans lost time to Wiggins in the Time Trial there. On the descent Evans tried to go clear with two of his team mates George Hincapie and Teejay van Garderen, but Team Sky paced them back together before the reached the Col du Richemond which is also the next climb on today's stage. There  sky paced up the ascent of another group that had Luis Léon Sanchez (RAB) as the danger man in it, before absorbing him back into the peleton.

After the Col du Richemond there is another long descent toward the finish, today it is 20.5km to Bellegarde-sur-Valserine


We shall see what tactics they try to make up time on Wiggins today on exactly the same three categorised climbs as they climbed a little over a month ago.
Posted by Stephen Glenn at 07:47