Where Has the Sprint Gone from Cav? #TDF

Yesterday's stage left a lot of questions for Mark Cavendish and the HTC-Columbia team.

His team took control of the race 5km from the finish, last year that would have been enough. His big powerful train would have propelled him towards the front of the peleton ready to launch him towards the line with a couple of hundred metres to go. Sure there were roundabouts in the lead up to the finish but the HTC boys were grouped at the front and looking out for their man.

Then it came Mark Renshaw was at the head with Cavendish in his wheel. Over to the right hand side of the road. Cav and Thor Hushovd had been shoulder to shoulder behind their respective lead out men in the seconds before.

Then against the script over on the left comes a surge from the other sprinter, who was near the front through all the roundabouts, Alessandro Petacchi made a run for the line. There seemed to be no response from Cavendish and Hushovd realised he was on the wrong wheel too late to switch across the road to come in 9th in the sprint, 3 places ahead of Cav who appeared in the last metres to have lost one of his pedal bindings.

But even before that it looks like Cavendish infection earlier this year may have taken something away from him. He may not be quite the sprinter he was over the last two years as a result. Of course it may be like everyone else he was still merely shattered after the Hell of the North the previous day, when he did ride well and came in 25th when there were groups all down the road. There was a 1% incline at the end, not a lot but after the day before it may have been sapping.

Today of course is another day and another day suitable for sprinters. Again it is flat with no real concern providing an escape isn't given too much head. But there may be concern over just how much speed in currently in the legs of Britain's top sprinter, or course come later today I may not have any concerns over that whatsoever. Cav has been one to bounce back before when he hasn't won as expected with a double, Friday's stage is also for the sprinters. So we wait and see. 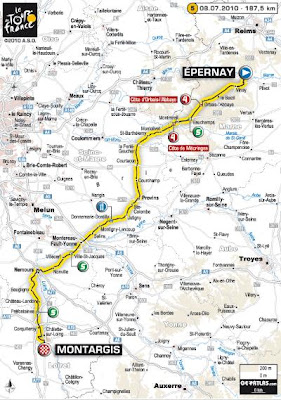