Time for the BOTY Nominations 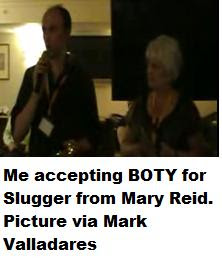 Last years little shindig in Old Harry's Bar, Marriott, Eastbourne was so jam packed that I was fortunate to turn up early with Lionel to claim a good spot near all the action. Sadly Mike Fealty the big man behind Slugger O'Toole was mistakenly told that the upstairs bar was Old Harry's so I had to step up to claim the BOTY for best non-Lib Dem Blog as a contributor. Titter ye not, tis true.

Yes there may be just under a week left to vote for the Total Politics Blog of the Year but the main event of the summer has just been announced. Yes that is right the Lib Dem Voice BOTYs are entering their fifth year. Men, women and elephants of the Lib Dem blogosphere will be getting sweaty palms, or around the collar or itchy trunks. But don't also forget there is more than just the best blog that gets awarded in the veritable smorgasbord of awards.

This year’s awards are as follows:


Full details of the classifications can be found on Lib Dem Voice. As are details of the esteemed judging panel. It would appear that Costigan Quist has done a Reggie Perin the the pile of clothes and shoes seen beside Eastbourne pier at the end of conference last September were merely a decoy, as the esteemed mystery man or woman or cuddly toy whose Himmelgarten Cafe was winner in 2009 maintains the tradition of last years BOTY winner sitting on the panel.

He will be joined by:


Please feel free to nominate this blog indeed as Iain Roberts said on Liberal Democrat Voice early in the period for consideration.

And who are we to argue?

Indeed the Hon. Lady Mark kindly when posting my Slugger acceptance speech said 'At some point, it would be nice if Stephen won an award himself.'

So make it happen. All recognition of my genius will be happily accepted by emailing Helen Duffet at helen@libdemvoice.org
Posted by Stephen Glenn at 18:33