Sylvain Chavanel took the yellow on the damp and treacherous road into Spa, he only wore it for one day after that the cobbles of the Hell of the North causing his problems. However, just as Spa is famous for Formula 1 today on a Formula 1 Sunday the French man is back in yellow.

Yesterday on the penultimate climb up the Col de la Croix de la Serra Chavanel in a grop of 7 started to pursue the leading group of 3 including his Quickstep team mate Jérôme Pineau. Pineau had taken maximum climbers points in the first 5 climbs yesterday to secure his early hold on the Polka Dot Jersey being the only man so far to wear it. Meanwhile behind him the man who took the yellow jersey back off Chavanel Fabian Cancellara was struggling to stay with the pace and was only just ridden back up to the pack by the summit. 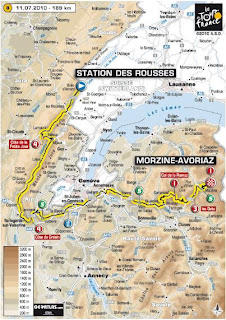 On the last climb of the Côte de Lamoura the head of the race changed hands within the same team when Chavanel on his second lone breakaway of the Tour overtook his team mate in the spots. In the end he crossed the line 57 seconds ahead of Rafael Valls (Footon-Servetto) and 1'27" ahead of Juan Manuel Gárate (Rabobank). However more crucially, 1'47" ahead of the group of Alberto Contador, Cadel Evans, Lance Armstrong, Andy Schleck and Bradley Wiggins. However, Gerraint Thomas who had been second was 5'12" back on the leader having suffered a puncture on the last climb 10km from the end. But the maillot jaune on the back of Cancellara suffered merely in the legs and not mechanically to end up 14'12" behind.

Today's stage is the start of the high mountains although as Bradley Wiggins said of yesterday's stage ""I think the stage was harder than a lot of people expected but it's good to get the first mountain one out of the way". Today however there are the arrival of the first category climbs to this tour. The first Col de la Ramaz is a 14km climb averaging 7% gradient. The descent is an even steeped hill getting to 10% in places so it is fast and winding. Then after the descent a minor 3rd Category climb up Les Gets before climbing 14km out of Morzine up to Avoriaz at 6.1%. Not as tough as la Ramaz but at the end of a hard day and other cllimbs just before, somebody might just lose the Tour today.

So the mountains are here, this guy has posted a video of his reconnoiter of those final climbs.