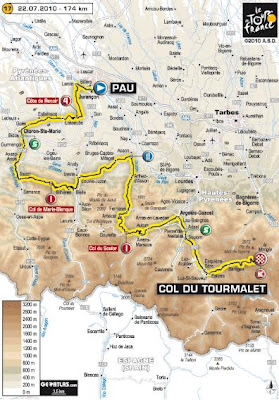 On Tuesday the bulk of the field rolled into Pau together after following the sequence of mountains that set up Eddy Merckx for the first of his five yellow jerseys. O t would have been a year if it had existed that Eddy would have won the white jersey for Best Young Rider along with the Yellow, Green and Polka Dot that he did actually win in 1969. It would have been a singular achievement.

Today will be like a case of retracing your steps as it the riders had lost something. Normally having reached Pau after tacking the Pyrenees in a westerly direction the Tour will put the mountains behind them, but not today. We're heading back in, and back to the Tourmalet. But before we get there it is no stroll in the park.

The first major climb of the day is the Col de Marie-Blanque. Not particularly big at only 1035m. However, the last 4 km of the ascent average 10% gradient. Next up is the Col du Solour which was climbed but not categorised on Tuesday as part of the ascent of the Col d'Aubisque this time it is being approached from its toughest northern approach, earning it the Premier Category classification. From the Solour the last 56.5km are very familiar to the riders, they were only here on Tuesday heading the opposite direction. 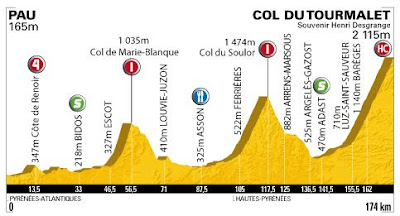 It is back up the Tourmalet with a longer ascent and with a steeper kick near the end. This is the last mountain of this years tour and surely one on which several of the leading GC contenders are going to have to attack on. Schleck will need time over Contador at the top if he is to follow him as a winner of the Yellow and White jersey in the same Tour, this is Andy's last year eligible for the young rider category and while he'll be emulating Jan Ullrich with a third success along with Contador and Laurent Fignon he'll want to have won yellow and white together.

Behind the leading two the 2003 winner of the white jersey Denis Menchov is going to have to open up a gap on Sammy Sanchez the Olympic Champion who is 13 seconds ahead of him and the somewhat better time trialist over a long distance. Although they both had the same time over the short Rotterdam prologue. Three previous winners of the young rider category have never filled the podium positions in Paris, so this year's Tour may just make a little bit of history in that way.

Even further back there is a possible battle to be the laterne rouge (the last man). German Bert Grabsch (HTC-Columbia) currently brings up the rear at +3h 55' 10" but only 2 minutes 1 second up the road is Italian Adriano Malori (Lampre).
Posted by Stephen Glenn at 05:40