What Do Points Make? #TDF 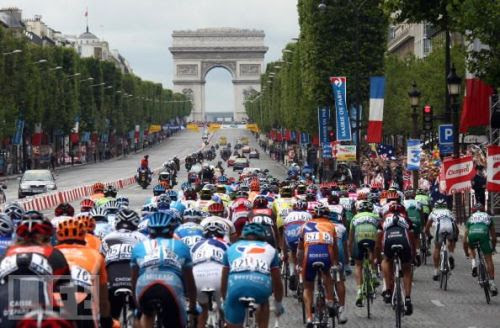 Today as in every year since 1975 the Tour de France is heading for 8 circuits of the Champs-Élysées. Most of the prizes have been decided.

On the Col Du Tourmalet on Thursday the Polka Dot Jersey for the King of the Mountains was finally planted firmly on shoulders of Anthony Charteau (BBox). The challenge from fellow Frenchman and the old man of the Tour Christophe Moreau (Caisse d'Espange) failed to close the remaining gap.

Yesterday it was as you were for Yellow and White (Young Rider) as last year. Alberto Contador (Astana) was 31" ahead of Andy Schleck (Saxobank) in the time trial into Pauillac. It means that Contador leads by 39", an irony not lost on many which was the exact time difference he took out of Schleck following his chain falling off when he was attacking Contador on the Port de Bales on Monday. It means that Contador is in Yellow and Scheleck will equal Jan Ullrich with a third successive White Jersey. The top three have all been the best young rider because Denis Menchov rode a good time trail yesterday to displace the Olympic Champion Sammy Sanchez from the final podium.

Lance Armstrong in his last Tour will be on the podium but only as a part of the best team as Radioshack have won that prize.

However, the real excitement lies in the Green Jersey competition for points. The current standings are:

The point allocation on the line will be 35 for first, 30 for second, 26 for third, 24, 22, 20, 19 etc. There are also two intermediate sprints on the Champs-Élysées offering 6,4 and 2 points. It means that three teams will be working hard to secure the Green Jersey today.

If Mark Cavendish can repeat his performance in the French Capital from last year and win on the famous boulevard. The Norwegian would have to be second to stay ahead and the Italian if he was seventh would be equal on points but behind the Manxman on stage wins therefore losing his lead. The question is will any of them be in a position to take the intermediate sprints as often these go to a breakaway, or will the teams keep up the tempo for the full eight circuits to give their men a chance to get a shot at the 12 points on offer.

This will be an exciting afternoon on the approach to Paris, especially for three sprinters and a busy one for their teams.
Posted by Stephen Glenn at 06:45