I have spent a lot of time in Richmond Park and Kingston North, being a Kingston graduate I actually did a training run around the Park for a start.

Of course at the local MP recently became the billionaire Zac Goldsmith. He has questions to answer about his expenses in the 23 days before the campaign. So he came into Channel 4 News studio to answer those questions. It appears that he spend all this time merely asking why he wasn't allowed in to the studio earlier. Not getting on to the questions that are the height of the issue.

It is absolutely car crash TV. It is the absolute avoidance of the issue. It is a sham there clearly is something there to hide because he spends so much time talking over Jon Snow. The fact is that he doesn't even know the difference between the long and the short campaign.

BTW standard across the country for council and general election campaigns on the same day is two sided posters one side for the GE candidate one for the council candidate.

Also the jackets are a capital cost brought in for this campaign. Yes if they get used in further campaigns there is a usage cost entailed, but that is for future campaigns and only if said items get used (for example Corex posters). All of that is very clear in the guidelines and only becomes complicated when people try to hide election costs.

See also Alex Folkes asks some pertinent questions about the rants about re-use.

As for the Trikes apparently "they cost 2p a mile, they can take passengers, carry leaflets and they are surprisingly fast." They were also embossed in Back Zac and Tory. How do I know? Zac told us here. So surely if they are doing all that there has to be some cost involved not none. 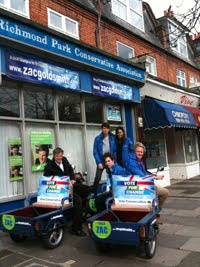 Also if they are so good at delivering leaflets it seems a shame that so many were wasted doing away all the greeness of their use.
Posted by Stephen Glenn at 21:18