Is There Death on Mars? 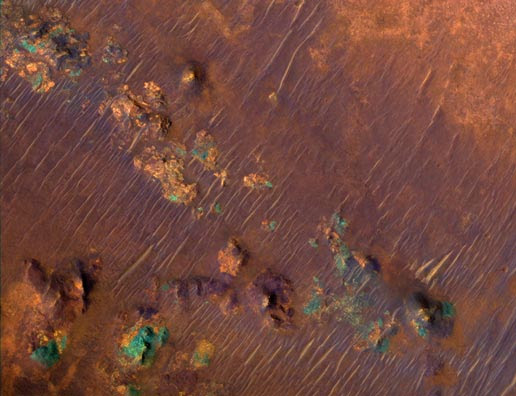 Researchers have discovered some rocks on the surface of Mars which are similar to some in Australia which have revealed fossilised remains of the earliest life on Earth were discovered.

Yeah a team for the Search for Extraterrestrial Intelligence Institute in California (SETI) have identified a trench in the Nili Fossae which has rocks similar to those in Pilbara region of NW Australia. They contain carbonate which is what life turns into in many cases when it is buried.

The white cliffs of Dover contain calcium carbonate, limestone, to give them their distinctive white chalk colour.

The rocks at Pilbara contain some distinctive features (stromatolites) which scientists believe were causes by microbes. Dr. Brown from SETI said:

"The Pilbara is very cool. It's part of the Earth that has managed to stay at the surface for around 3.5 billion years - so about three quarters of the history of the Earth.

"It allows us a little window into what was happening on the Earth at its very early stages.

"Life made these features [stromatolites]. We can tell that by the fact that only life could make those shapes; no geological process could.

"If there was enough life to make layers, to make corals or some sort of microbial homes, and if it was buried on Mars, the same physics that took place on Earth could have happened there."

However, the Nili Fossae is not on the list of possible Mars landings in the foreseeable future the area being too risky to land at. So while robot geologists can look at other parts of the Mars-scape they may not get to this key site. It may have to wait until human geologists can get there.

Just wonder if we'll end up seeing Tony Robinson clad in a spacesuit presenting Time Team from the surface of the red planet.
Posted by Stephen Glenn at 10:28