Can We Form a Coalition with the Mayor? 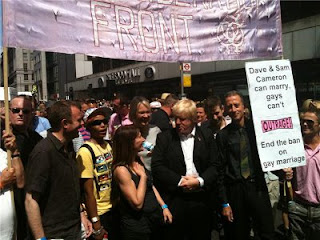 I know that Jae Kay has had a few things recently to say about our party's public statements on Equal Marriage, here's hoping for an official federal policy position to be taken on this soon. I totally agree that allowing civil partnerships in religious places is just a muddle. For a start the only religious places liable to carry out such ceremonies are those that want to allow same-sex marriage anyway.

It makes me sad when I hear comments, like I heard earlier in the week, from fellow Christians that they merely respect the right of same sex couples to have a civil partnership, but not to allow them a marriage, also denying them the right to a choice between a religious or civil ceremony depending on their choice. They often claim that their religious organisation doesn't allow it, yet they are also ruling out the possibility that other religious organisations may be in favour and wanting to offer it. Yet we maintain a blanket ban rather than liberating the rules on what can be.

Therefore I think us Liberal Democrats who believe in equal marraige should breakaway from a coaltion with David Cameron and insist that Boris Johnson is installed at number 10. Why? Well at today's London Pride the following exchange happened on the platform at the start:

BoJo: If we can have a coalition between Tories and Lib Dems, why can't we have gay marriage?

PT: There you are – the mayor supports gay marriage.

So Boris is offering us a coalition that supports equality in marriage.