How Could We 'Cav' Doubted? #TDF 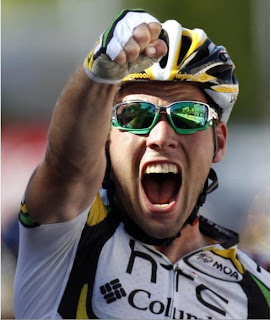 *
Well I got on the bus earlier and opened Tweetdeck to some very good news. The picture to the left is a clue.

Yeah earlier today I did ask 'where had the sprinting legs of Britain's Mark Cavendish go to?' well it seems we now know. The answer is simple they were waiting for him in Montargis which is where today's stage ended.

For the second day the three man escape was caught in the closing stages on this occasion with 4km to the finish, with Cavendish's HTC team heading the peleton as the last man ahead of the race Jose Juan Gutierrez (Caisse d'Epargne) is finally swept up. Along with Jurgen Van de Walle (Quick Step) and Julien El Fares (Cofidis) they had been ahead since the early stages. Gutierrez sweeping up all three of the intermediate sprints on the way, coming second to the other two in the two fourth category climbs of the day.

But after HTC has led the sweep up the train seemed unable to keep it as they weaved into Montargis. In fact Garmin took over the lead at one point and Britain's own David Millar (sitting 15th overnight) at the fore. Cavendish and Thor Hushovd are yet again further back riding shoulder to shoulder. But as the last Garmin rider peels off it is Mark Renshaw on the wheel followed closely by a certain Manxman.

As you can tell by the picture Cavendish did indeed win his eleventh stage on the Tour over the last three years. Followed by Gerald Ciolek (Milram), Edvald Boasen (Sky), Jose Joaquin Rojas (Caisse d'Epargne) before Hushovd.

Sprinters are often some of the toughest men in pro-cycling. Day in day out they are getting elbowed at the front of the pack in the closing stages. If something goes even slightly wrong they are involved in some of the highest speed crashes in traffic. Only a crash over a wall descending a mountain can compare. But how much does it mean to someone like Cav to have won today, having crashed out on the first ideal stage, punctured before the cobbles and had nothing to give yesterday? Well I think this says it all. 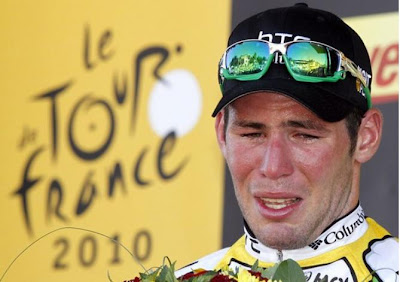 So congratulations Mark Cavendish, and that comes not just from me but from a certain seven time winner as well. Having apologised to his team yesterday for not being able to repay them for their support he made it up for them all today. 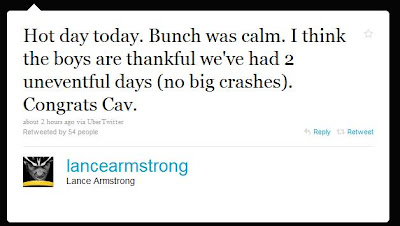 Now if you are quick you can catch the highlights on ITV4 which is about to start.