Scotsman's Non-News Story of the Day

Well I can't believe the sensationalism in this headline in today's Scotsman: 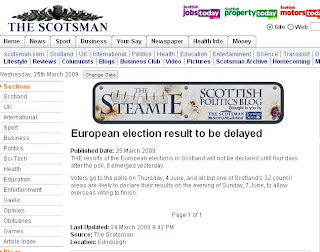 Now it would appear that this is a sensation. A novelty. That for the first time we are being denied the right to know the results of our votes until Sunday 7th June. Actually back in 2004 on the Sunday after polling in the last European election I hopped on a bus and turned up at Bathgate Academy for the counting of the West Lothian ballots in the European Election.

It has happened at least for the last two Euro Elections and that is just from memory. The reason is that some of our European neighbours either have one or two days of weekend voting. It means that all the votes are being counted simultaneously across Europe and the shape of the new parliament becomes known.

Hardly delayed in my book, but right on schedule.

Update: I have to say that the oversenstaionalism is showing up one thing the ignorance of the Cybernats* who post on the Scotsman's forums. Here is a brief Q&A for their rants, as I'd hate them to remain in ignorance.

Like all elections the postal votes will as ever be dealt with opened and verified with the same scrutiny as opening of other boxes. They will then on count night be mixed with another box and counted as normal.

Boxes will have been sealed with numbered cable tags at close of polling in the precence of that party polling station agents present. The unbroken tags will be witnessed being cut at the other end. In the interim the boxes will have be locked up in either a bank safe or police cell to avoid interference.

3. Labour to win all seats even were not standing candidates.

Well unless they mess up their list paperwork they will have their list in for the 7 seats across the one Scottish constituency for 7 seats. These are then elected by PR.

In fairness I was there at the Glenrothes count and for most of it was stood next to Tricia Marwick, SNP MSP for Central Fife. We even discussed the performance of the counting team as it was going on. She had no issue with them, there was a snide comment about a little incident but it did not affect the effectiveness of the vote. What happened afterwards to the marked register has nothing to do with the counting team as this was never in the count hall. The ballots and the registers went to different locations after the close of polls.

See above. These are counted on the day after being resealed upon verification of the offical mark at times determined by the Returning Officer.

*At least the Nat Bloggers tend to be clued up than this lot, and if they aren't will take correction from fellow bloggers as a lesson learnt.