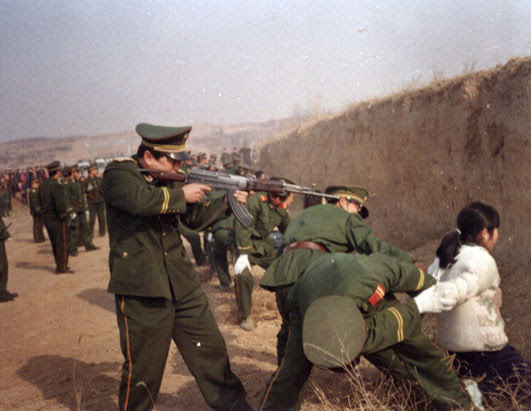 In 2007 there were a total of 1,252 executions around the world. In 2008 one country had 40% more that the entire number for the world in the previous 12 months with 1,718. Not only was China responsible for that increase by by itself the People's Republic of China accounts for 72% of the world's executions in 2008. Four other countries Iran, Pakistan, Saudi Arabia and the United States join them to make up 93% all all in the last 12 months.

It could me worse as Amnesty International say that the figures for China are only the minimum estimate, the exact figure is a secret and may be as high as 6,000 to 15,000 according to some activists estimates. This was despite a promise to the International Olympic Committee (IOC) to clean up their human rights record ahead of hosting the game in Beijing last summer. Yet while the world was enjoying the hospitality of the games more than 4 times the number of China's own citizens were put to death than the year before.

The change in style of execution has also changed from firing squad to lethal injection a move that Chinese authorities says shows a greater attention to human rights. And mobile death vans travel from town to town to administer the injections cutting costs.

The sharp increase goes against the trend in recent years which showed a decline in executions in China.
Posted by Stephen Glenn at 14:06