Sorry for not doing this yesterday on the second day of the Paralympics but I was seeing Games Makers, the Paralympic Agitos hanging from Tower Bridge and watched some of the coverage on the big screen at Potters Field next to City Hall after I had a job interview.

First up was the first Paralympic stamp for Wales and a gold post box in for Tredegar in Blaenau Gwent because of Mark Colbourne's win in the men's C1 individual pursuit. 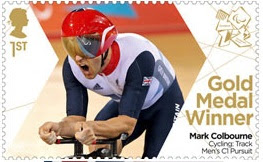 The athletics started in the Olympic Stadium and there was gold from the start with Hannah Cockcroft finishing 10m clear of the field in a new paralympic record of 18.06 secs. Halifax will get a gold post box to celebrate the winner of the women's T34 100m. (Is there still any gold paint left in Yorkshire?) 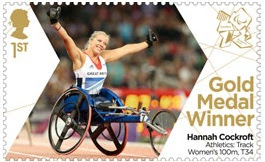 Don't go looking for their stamps yet though as they are not being released until 3 September, i.e. Monday.