Paralympics GB finished yesterday with more silver medals than Beijing and the same number of bronzes. With 25 golds, only 2 more yesterday, so far they are 17 down on what they achieved then, but within striking distance of the Olympians. Today was to be no exception in continuing the Gold Rush though meaning more Royal Mail stamps.

First up down at Weymouth there wasn't enough wind to be able to compete in the medal races, however it didn't prevent GB's first ever medals in Paralympic sailing and one of those was gold. Helena Lucas may have been the only woman in the 2.4mR class fleet but after yesterday's race she was guaranteed at least silver with her lead over Germany's Heiko Kroger. A gold post box will appear in Portland. 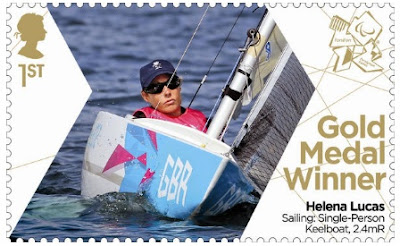 Then there was hiStorey being made over at Brands Hatch. Yeah that women Sarah Storey won her fourth gold of these Games in the C4-5 women's road race. She was in a lone breakaway and finished 7 mins 22 secs ahead of the rest of the field: she actually caught the men's C1-3 peleton that was 2 minutes up the road. As a result she has equaled Tanni Grey-Thompson as the female GB Paralympian with the most gold medals they both now have 11. Also level with fellow 'swimmer' David Roberts with his 11 golds. Will there be more at Rio to add to Storey's 20 year career in the pool and on the bike.

For the record Storey has 11 gold 7 silver and 3 bronze to Grey-Thompson's and Robert's both with 11 G, 4 S, 1 B. Only Mike Kenny has more golds 16 plus 2 silvers. She also is the British athlete on the most gold medal stamps....so far. 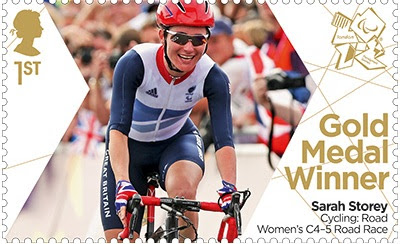 Next in the Aquatic Centre 15 year-old Josef Craig took three seconds off his own world record in the Men's S7 400m freestyle which he took off fellow Brit Jonathan Fox in qualifying this morning, who this time finished outside the medals. He took the lead at 150m and never looked like getting caught from there. He won in 4:42.81 and was the baby on the men's swimming team. 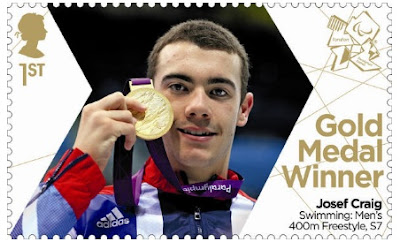 Then it was over to the Olympic Stadium where the 29th Gold matching the Olympians and 104th medal surpassing Beijing came in one 32 seconds of explosion. Hannah Cockcroft beat her own Paralympic Record set in the heats to win the sprint double in 31.90secs and 2.26 seconds ahead of the rest in the women's T34 200m. Her second gold medal winning push will see a second golden post box. 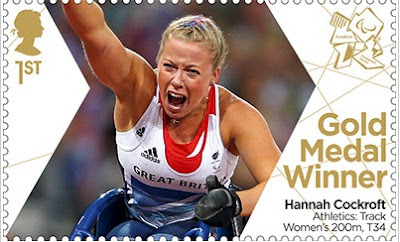 But things were not over in the stadium just yet. Within an hour Dave Weir was up for the third and final of his track finals in these Games; the T54 men's 800m. He sat in second from the break until coming off the last bend into the home straight as he pulled away to make it three in London 2012. 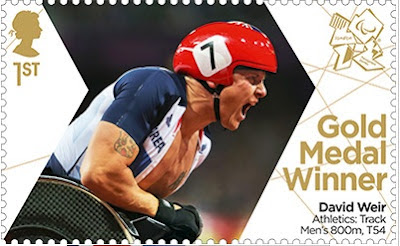 In the very next race the men's T44 100m Jonnie Peacock beat Oscar Pistorius, Alan Olivera and others to be the fastest man on one leg. The crowd were roaring 'Peacock, Peacock' before the start which caused Jonnie himself to ask them for silence. He ran away to the line in 10.90seconds. 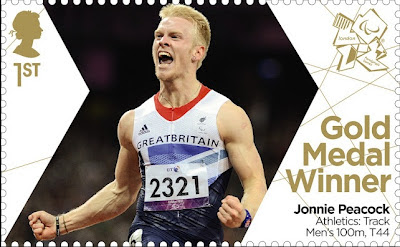 Three days to go but already surpassed the number of medals from Beijing and the target set by Paralympics GB. Also more Gold medal stamps for the Paralympians than the Olympians.
Posted by Stephen Glenn at 22:00