Another day and more golds meaning more stamps for the Royal Mail to produce. The first two of the day were actually people claiming their second gold medals of these Games matching the achievement of Sarah Storey so far.

First up back at Greenwich Park Natasha Baker won a second gold in the Grade II freestyle dressage. She was inspired to take up the sport after watching Lee Pearson in the 2000 Paralympics when she was just ten, she won today with a score of 82.8% over 5% more than her nearest rival. While her inspiration only took bronze for his Bond themed freestyle ride later in the afternoon. A second Uxbridge post box will be going gold in Natasha's honour. 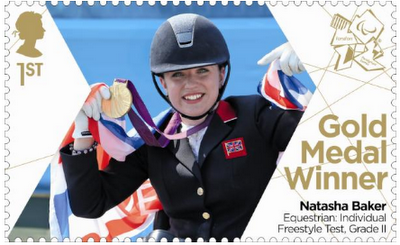 Then Ellie Simmonds added another in the women's SM6 200m medley. Who beat her own World Record for a second time in the day powering to 3:05.39. She has now set the 200m medley world record in the Aquatic Centre three times. For her second gold post box Swansea where Ellie trains with the elite Paralympic swimming squad will be honoured. 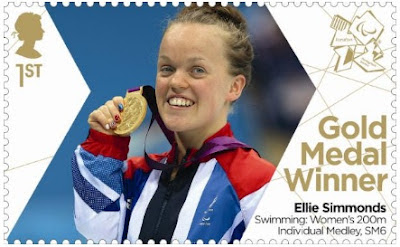 Next up over in the Olympic Stadium there was a someone upgrading from silver. In the men's 100m T53 Mickey Bushell, the world record holder, pushed his way to a new Paralympic Record of 14.75 secs. He'll be hoping for a second like the rest of today's winners in the 200m. He'll get a gold post box in Telford, in fact he chose one just down the road from his family's home. 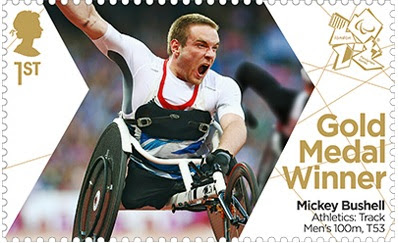