It may the Sunday in the middle of the Paralympics, but just like their Olympic counterparts the Paralympians were not giving the Royal Mail stamp designers a day of rest.

Over at Eton Dorney there was the first gold of the day. The Mixed Coxed Four LTAMix4+ of Pam Relph, Naomi Riches, David Smith and James Roe and cox Lily van den Broecke took the gold to add to their world championship. Gold post boxes will appear in Weston Turville (for Pam), Marlow (Naomi), Stratford upon Avon (James), Aviemore (David) and Oxford (Lily). 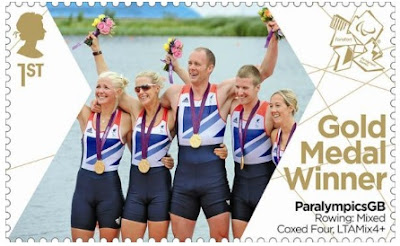 Over in the Olympic Stadium there was a young 21 year-old going for his second medal of these games in his preferred event. Aled Davies in the Discus F42 threw 46.16m in the final round after already a guaranteed gold to add to his bronze in the shot putt. So there will be a gold post box in Bridgend for the Welsh thrower. His medal was presented to him by the future Princess of Wales, HRH The Duchess of Cambridge. 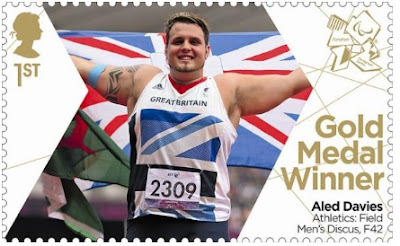 Then it was over to the velodrome where there chances in all three events on the final day. In an all British final in the men's tandem sprint saw Anthony Kappes and his pilot Craig MacLean take the first race. They then took the banking round and jumped with over a lap and half to go than Neil Fachie and pilot Barney Storey had to settle for only silver today and had sat up before the bell. 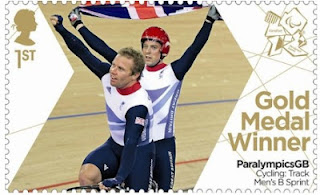 Next up the gold rush headed into the Aquatic Center in the women's 200m Freestyle S14 Jessica-Jane Applegate was only 4th at the half way stage and third at 150, but in the final 50 metres she came through to  touch out with a win by 0.55 secs. 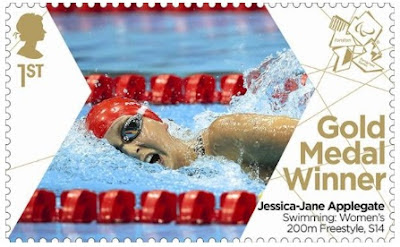 At Greenwich Park Sophie Christiansen onboard Janeiro 6, surely a horse named for four years time scored 82.7% in Grade 1A Dressage. 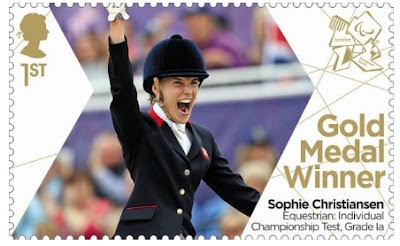 Sophie's win along with Natasha Baker in her class yesterday and the three silver in the other classes also ensured that Team GB yet again took the team gold. So Lee Pearson wins his 10th with Sophie Wells and Debbie Criddle also forming part of the team. Gold has been the exclusive domain of the GB equestrian team since Dressage was introduced to the Paralympics in 1996. 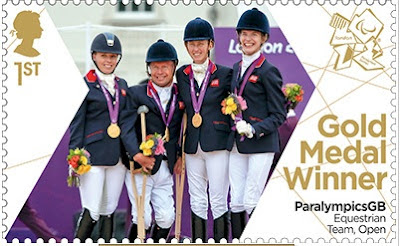 Finally back on the track in the last race of the night it was time for another GB Paralympics poster boy to follow in the footsteps of Mo Farrah and take men's T54 5000m gold. Dave Weir did not disappoint coming into the back straight of the last lap he was starting to come up on the rear wheel of the leading Korean and then with 200m to go he went on the attack and surged away in the last 100m to win with a gap between his rear wheel and the chair behind. So a gold post box for Wallington, Surrey. 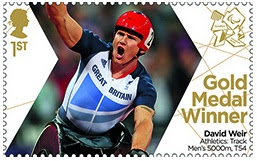