Day three and the GB Paralympic gold rush continues so too do the stamps, though not until Monday. It really was a Superhuman Saturday

First up in the velodrome there was success in the men's B 1km for Neil Fachie and his sighted pilot Barney Storey (yes keeping the gold rush in the family is Sarah Storey's husband). Neil gets a gold post box in Aberdeen and Barney as well as getting a gold medal (a first for the pilot riders) gets a gold post box in Disley, Chesire. 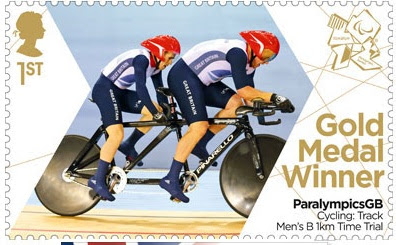 The track produced our next medal with our very own homegrown bladerunner Richard Whitehead in men's T42 200m. Richard is a marathon runner normally, but there is no event over that distance for his class. So not wanting to have the opportunity to compete before a home ground stolen for him he asked the IPC what he had to do, they said run the 200m, so he did and broke his own world record to win in 24.38. He certainly did have to steal away his medal as his gold post box will appear in Robin Hood country in Nottingham. 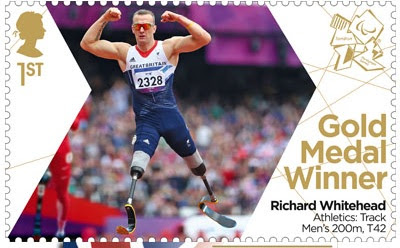 Greenwich Park saw a continuation of gold in the dressage ring from the Olympics. However, not in the form of Lee Pearson who only managed to add silver to his 9 golds so far. But Natasha Baker in Grade II took a first equestrian gold for GB Paralympics. Uxbridge, home of Brunel University (not Abraham Lincoln University my American friends cf Olympic Opening Ceremony) will be the location of her gold post box. 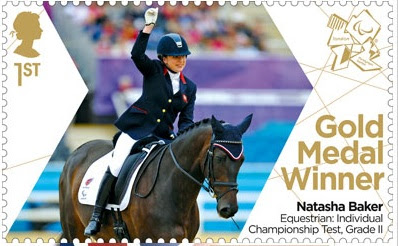 The gold kept on coming not just in the velodrome, but also in the Storey household. Yeah Sarah was back to her winning best in the women's 500m time trial C5. So if Disley can manage a third post box to be painted gold they will all be due to the Storeys. Sarah isn't finished yet as she will be looking for more on the road at Brands Hatch. 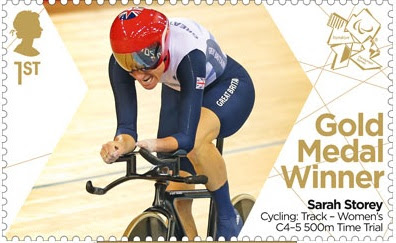 In the pool the whole debate about whether Victoria Arlen was in the wrong category as for the first 300m she was racing just ahead of Ellie Simmonds in the women's S6 400m freestyle. In the last hundred Ellie made her move and smashed the world record by 5 seconds 5:19.17, Arlen whose record it was also smashed it just 1.01 seconds down in silver. So Ellie not only just gets her face staring down from bill boards but her own gold post box in Aldridge, Walsall. 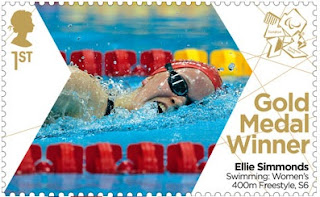