So at the start of the day there were 23 Golds for Paralympics GB, but Dame Mary Peters was calling for all 27 of the UK gold medalists to be honoured with gold post boxes. She was referring to Bethany Firth a swimmer for Seaforde, Co. Down, and athletes Jason Smyth from Eglington, Co. Derry and Michael McKillop (with 2 golds) from Newtownabbey, Co. Antrim.

Either way the Paralympians were closing in on the 29 golds won by the Olympians, so today there was to be no rest still for the Royal Mail stamp design team.

However, what was the story of today. Well the Storey got underway over at Brands Hatch with the cycling women's C5 Time Trial. Of course in the Olympics we took gold with Bradley a multiple Olympic Champion, so our very own Storey added to her haul of gold medals win a third at these Games, her fifth in cycling to go with her five in swimming. She won by 94 seconds over the 16km course. 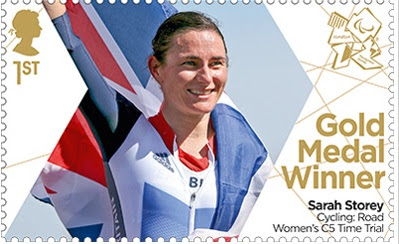 Finally in the pool we had a golden Hynd in the men's SM8 200m medley when Ollie Hynd made his breaststroke count to take the lead and go into the final length well a head and nobody ever looked like getting anywhere near him. His big brother Sam however was just outside the medals 4th in the same race, but Ollie like Lee Pearson now has a full set of Gold, Silver and Bronze from London 2012. So Ollie will be expecting to see a golden post box in Kirkby in Ashfield. 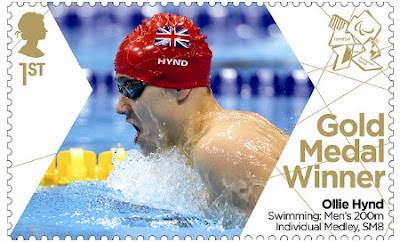