Targets reached for the team, but there is no stopping them. There were yet more medals but only one of them gold today for Paralympics GB meaning more for the Royal Mail to do to keep producing those stamps but a light day.

Early on today was an gold in the morning session in the F51/52/53 women's discus. Josie Pearson threw a F51 world Record of 6.58m in the third round; her third of the competition. She didn't throw any further in the final three rounds but she didn't need to securing GB's 32nd gold. As it was a mixed classification event it was decided on points not distance, but none of the other categories broke their world record even once so gold was coming to team GB 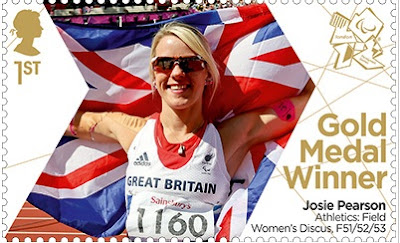 It wasn't the only UK athlete to win gold today. Jason Smyth from Eglington, Derry won his second gold of the Games defending his T13 200m title for Ireland and smashing the world record in the process. His time of 21.05secs for someone who is partially sighted is impressive, he was 0.9 seconds clear of silver medalist Labzin from Russia.
Posted by Stephen Glenn at 22:00