Is this another case of Alliance fence sitting? #equalmarriage 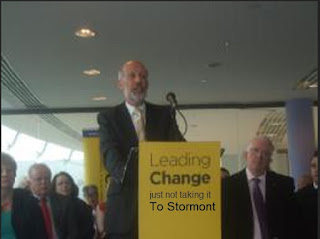 Reading the comments from the Alliance Party leader David Ford on the front page of today's Newsletter I'm a bit confused by this one.

"It was made very clear that this would be party policy but on an issue of conscience such as this there will be no question of enforcement of the whip if someone cannot go along with it."


I posted in praise of their motion on Saturday, but now I'm a little less enthusiastic about they are presenting and talking about it. I already had an issue with the wording "robust protections" for faith groups and religious celebrants that don't want to, to not have to be forced to carry out same-sex marriages. Surely adequate protections by enshrining religious freedom in law on this is enough and the use of the word robust is already appeasing to those who don't want to have this on their conscience.

So with these robust protections in place what is there to still object to?

Well Trevor Lunn MLA for Lagan Valley is the first to raise his objections and a shows the same sort of failure to differentiate individual beliefs and representation of equality for all that he represents.

There is also the fact that the Alliance are saying they have no intention of bringing this motion before Stormont! Yet Stormont is the only body that has responsibility for bringing in Marriage Equality in Northern Ireland. David Ford is saying the Sinn Féin are not including the issue of churches (surely he means faith groups: Editor) in their council motions, but surely that is the reason to work with other parties to form a motion to bring to Stormont that does deal with these rather than to sit back. Does that mean that should a motion get before Stormont without those robust protections that the Alliance want that instead of working to change it they would vote against? Surely the time to work on getting those protections in place is while forming the original motion and not later on.

So the Alliance Party have a policy that they appear to not be actively doing anything about. Also one to which none of their elected representatives appear to be bound by. This is not just another case of fence sitting, but one of trying to appease people by appearing to be liberal, but being so conservative in outcome that they will not forcing the issue where it actually matters.

Update After having a few discussions with members of the Alliance and others I am seeking clarification of these issues from my MLA.

Update 2 I'm getting news of different responses from MLA's responses to me and others. Some are saying the whip will be used and others that pragmatism is required for those with personal difficulties with this so that they can be brought along. I'm none the wiser after a day of discussing what is being meant by this.
Posted by Stephen Glenn at 12:43