Why are West Lothian MSPs silent on Equal Marriage?

There are a lot of things you could say about West Lothian's constituency MSPs Fiona Hyslop (Linlithgow) and Angela Constance (Almond Valley), but one of them is not that either of them are shy. 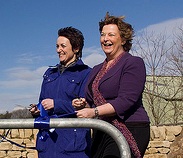 Over the years I have known them they have both been forthright about their views and expressed their opinions in an open and public way. Therefore when the Equality Network published their list on which MSPs were supporting equal marriage I was somewhat shocked to see that neither of the them had expressed an opinion.

I know it was a question that came up in the hustings in the lead up to the 2010 Westminster elections, because I seem to recall being the only one in a church based hustings to come out in support of equal marriage rather than playing to the crowd. Of course I wasn't there to hear the questions in the 2011 hustings for Holyrood but I cannot think that it wasn't posed again there to a different set of candidates.

Of course the fact that neither have answered the Equality Network's letter or signed their pledge does not necessarily mean they are against. But you would have thought when the leadership of their party SNP is so strongly behind the notion of equalising marriage rights that they may have added their voice to the majority of others.

Other MSPs representing West Lothian on the list have been more forthcoming. Labour's Sarah Boyack, Kezia Dugdale and Neil Findlay have all signed the pledge in support as has the Green's Alison Johnstone. It is only the Conservatives David McLetchie who has written to the Equality Network to record his opposition while his party colleague Gavin Brown is also in the unknown category.

If anyone from West Lothian has asked their directly and received a response I'd be interested to hear the outcome, please add it in a comment below or email me using my contact details.
Posted by Stephen Glenn at 14:24