It is that time in the look at the teams in this years Tour to head to the Pyrénées and see the Orange wearing basque flag waving fans cheering on the race and hopefully some of their home grown talent. There are a few in other teams but their team is Euskaltel Euskadi. And in Olympic year they do have the Olympic champion. Samuel Sánchez. 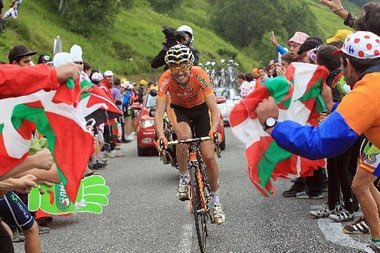 Samuel Sánchez not only is Sánchez a great climber he is also one of the fastest descenders in the peleton as well. With less mountain top finishes this year he may be a great danger at the end of stages. He has podiumed twice in the Vuelta a España and in 2010 once Alberto Contador was removed from the standings he was raised to 3rd in the Tour. Between the Vuelta and the Tour he has seven top 10 Grand Tour finishes. With the descents after a number of climbs this year he will be looking to open gaps to make up for his relative inability on the long time trials.

Mikel Astarloza during the 2009 Tour he tested positive for EPO. But having served his two year ban Euskaltel Eusakdi rehired him and he will be making his return to the Tour this year. He had been originally 11th in the 2009 race. Until then he had taken part in every edition of the Tour since 2003 coming 9th in 2007. Now that he is back he is yet to see any results but with experience of being in and around the top 10 will certainly be up there in support in the Mountains.

Egoi Martinez  has been a King of the Mountain in the Vuelta (2006) as well as the 2010 Critérium du Dauphiné. Twice he has been the most combative rider in a stage of the Tour. One on the flat stage 4 of the 2006 Tour as part of a breakaway with a young British rider making his Tour debut called Bradley Wiggins. The other on the Mountainous stage 15 of 2008. His best Tour finish was last year's 33rd but he has been in the top 10 of the Vuelta (2008).

Jorge Azanza Soto a domestique for the team. His only success came in 2004 when he came first in the Vuelta a Córdoba. He made his Tour debut in 2007.


Gorka Izaguirre Insausti the elder of two young brothers in the Basque team joining last year. He is making his Grand Tour debut in the Tour while his brother Ion made his debut in the Giro. He placed 12 in the Tour Down Under at the start of the season.

Alan Pérez Lezaun another domestique for the team.

Rubén Pérez Moreno an experienced Grand Tour rider having debuted in the Vuelta in 2006 and Tour in 2007. His only victory was a stage win in the 2009 Tour of Bavaria.


Pablo Urtasun Pérez is the sprinter on the team he has yet to win a stage on a Grand Tour but has won stages in the Vuelta a Asturias and Vuelta a la Rioja which he actually came second in this year.

Gorka Verdugoan another experienced campaigner having completed the Tour 6 times since his 2006 debut. Although he has never finished in the top 10 he does strike fear into Cadel Evans. But only because he brought Evans, a former mountain biker, down in a downhill fall in 2009.
Posted by Stephen Glenn at 14:00