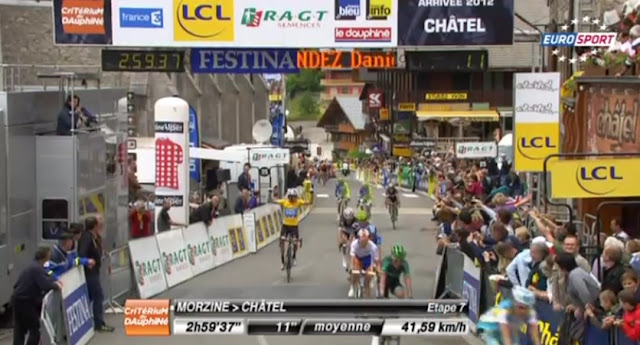 It is not every day that you see a British rider in the leader's jersey with the champions number 1 on his back celebrate this far down the field. But this in the moment that Bradley Wiggins knew he had defended the Critérium du Dauphiné.

It is seen by many as the ideal preparation for the Tour de France and indeed is the only other race that all the five time winners of the Tour de France have also won. Indeed on 10 of the 63 previous running the winner has gone on to win le Tour.
Having crashed out of last year's Tour with a broken collar bone as a result of a crash on the flat Wiggo's palmarès (results) have been impressive. He came 3rd in the incredibly tough Vuelta a España, the first Britain to be on the podium at the end of a Grand Tour. He then this year has won Paris-Nice and the Tour de Romandie before retaining the Dauphiné title he secured last year. Not even Merckx,. or anyone else has managed those three plamarès in one season.


With Andy Schleck having to retire this week after a crash in the time trial but after already appearing to struggle, and with Cadel Evans apparently unable to shake Wiggins in the Dauphiné, things may well be looking good for Brad ahead of the start of the Tour.
Posted by Stephen Glenn at 16:36