The best way to look at the emphasis of what Alex Salmond said as he launched his bid for a referendum on Scottish independence is through this Wordle. 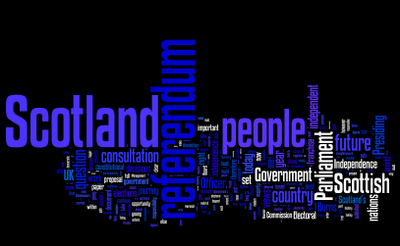 In all that is 2312 words during which he said some of the keys ones this many times:

One of those words above I highlighted was question. In his speech he has outlined what he wants the question to be. It is a very simple non-ambiguous question:

"Do you agree that Scotland should be an independent country?"

There can be no confusion as to the extent of that question. There would be no need for a follow up question is the question had been the convoluted, "Do you want the Scottish Parliament to open negotiations to lead towards an Independent Scotland" which at one point was muted.

If that is the question so be it. That question is clear. It is a straight yes/no. It is not confused by an option of devolution max, which though my preferred option is not one that is being offered at this time. Therefore I think the Secretary of State for Scotland should allow that question to be put to the people, the Electoral Commission will be running the practical side of the referendum. Let's get the Scottish and Westminster Parliaments around a table to discuss the niggling issues.