Luis Súarez needs to be shown the red card from Anfield

Luis Súarez was only born in 1987 by which time I had been supporting his current team for 13 years. However, I am not a Liverpool fan who will sit idly by when they are wrong!

On Saturday the Football Association released the report behind their decision to ban the player for 8 matches and fine him £40,000. It makes horrific reading in this day and age. I remember watching Match of the Day in the 70s when players like Viv Anderson and others who followed were the subject of racial abuse from the terraces and even their own fans. This was a decade before Saurez was born, so the excuse that he does not know that such language as he used should not be used on the field. It was always a ridiculous defense and one I'm ashamed that Kenny Dalglish and his team mates defended so publicly and erroneously.

In the meantime I'd like to remind Liverpool of the image below, of the club's poster to show racism the red card, including at the extreme right on the front row Súarez himself holding up one such red card. As a fan I love the contribution that Súarez has made the club, but as a liberal I think the club should try and offload him in the current transfer window. 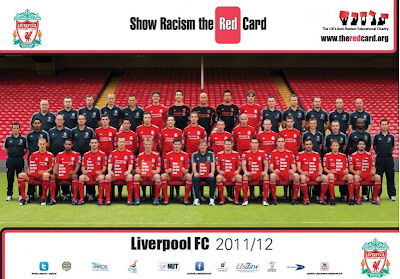