For the last 18 months Labour have been saying that the Conservative/Lib Dem coalition has been cutting too fast, they have stood along those in the public sector about their pay conditions etc. All the while many of us have asked what are their alternatives for this parliament then.

When finally the Guardian have got to the bottom of the issue in an interview with the Shadow Chancellor today. 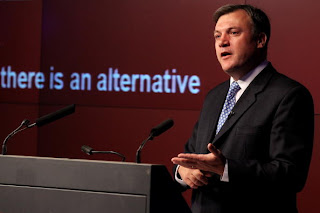 Labour's alternative it seems is do exactly what is being done.

"My starting point is, I am afraid, we are going to have keep all these cuts. There is a big squeeze happening on budgets across the piece. The squeeze on defence spending, for instance, is £15bn by 2015. We are going to have to start from that being the baseline. At this stage, we can make no commitments to reverse any of that, on spending or on tax. So I am being absolutely clear about that."

"It is now inevitable that public sector pay restraint will have to continue through this parliament. Labour cannot duck that reality and won't. There is no way we should be arguing for higher pay when the choice is between higher pay and bringing unemployment down.

"I know there will be some people in the trade union movement and the Labour party who will think of course Labour has got to oppose that pay restraint in 2014 and 2015. That is something we cannot do, should not do and will not do."

So now we as Lib Dems know just what we have achieved. We have tamed the Conservative plans to make things fairer for those who are worst off than they initially planned and we have done it so well that the Labour party cannot improve on what we have managed to get unto the table.

Therefore plaudits to Danny Alexander and David Laws in the early days for setting up a fairness in the plan to help the UK recovery. For making tough yet fair decisions. Even Ed Balls agrees.
Posted by Stephen Glenn at 00:21