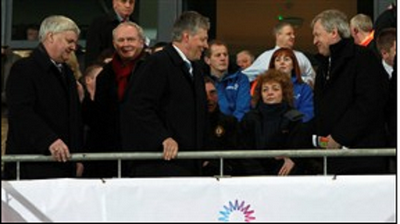 Now those of you outside Northern Ireland may be saying this is no biggy it is only a game. This is the first time a Unionist First Minister (or Prime Minister) has attended a game of the Gaelic Athletic Association, ever! Tom Elliot, his opposite number as leader of the UUP, said in his bid for the leadership in September 2010 that he would not attend GAA or gay events.

One wonders if the Pride organisers in Northern Ireland are sending off their invites to Peter Robinson to attend one of their events this summer after his has shown his is inclusive on one of the things that the other main Unionist Party in Northern Ireland's leader has shown reticence over. After all my predictions for this year did include the suggestion that a DUP politician would take part in Pride events this year.

Either way the attendance at a GAA event is big news. It shows that the First Minister is serious about inclusiveness. It is not a first for the DUP, Edwin Poots, while Minister for Culture, Arts and Leisure did attend the same event 4 years ago. He may have arrived in his seat after the Irish National Anthem was sung, but then the current Minister for CAL, Carál Ní Chuilín, arrived at her first Northern Ireland football international after Good Save the Queen. But that he was there is none the less a significant step.

"It's good to be here. I have had several meetings with the GAA, at a meeting-to-meeting level and when the invitation came I was glad to take it up.

"I'm not sure if I have caught all the finer points of the game, but I'm on the side of the referee on this one!"

As for the finer points of the game that can only come with attending more of them. It may also be too early to start kitting out the Castlereagh man with all the An Dún regalia, jersey, hoody, ball etc as a Down man should start to have. But when he feels confortable about getting one so he can wear it with the gay Gaelic players in Belfast Pride he could always purchase in in the O'Neills' Store in Enniskillen.
Posted by Stephen Glenn at 00:37