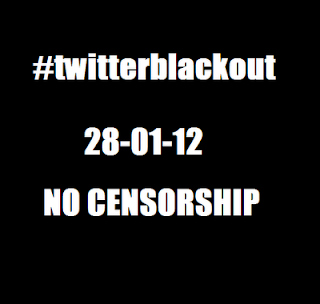 
Tomorrow I shall not be Tweeting. I believe that will be the first day since I first joined Twitter that I shall be doing this on any of my 5 Twitter accounts.

The reason is that Twitter are talking about allowing countries to reactively censor certain tweets while keeping it available elsewhere in the world.

Remember that Twitter was a powerful tool for the Arab Spring. Remember when people all around the world changed their location to Tehran to help protect the Tweeters from Iran who were starting to stand up to their authoritarian regime. Remember when we retweeted without naming the Iranian Tweeter that we were retweeting to spread the message in the hope that someone, somewhere in Iran would get the actual news rather than what was being broadcast through the state controlled media.


"Starting today, we give ourselves the ability to reactively withhold content from users in a specific country — while keeping it available in the rest of the world. We have also built in a way to communicate transparently to users when content is withheld, and why."

Was seen as a suicide note for the freedom of expression that the Social media application has allowed to flow in many of the recent upheavals around the world. Many see it in terms of Star Wars as Twitter going over to the dark side, not allowing people to use the force it offers for good.

When Saddam Hussein invaded Kuwait I was in the USSR for the first 2 weeks of that occupation. I did not know that we were at war until I was in Berlin, because at that time the only media I had was state controlled and somewhat supportive of the Iraqi regime.

If there had of been weapons of mass destruction in Iraq at that time, pre-mobile phones I may well have come out of the USSR to find that the UK no longer existed. Unaware of why.

This reaction from Twitter is what the UK Government said they wanted to do during the London riots. Yet some of the Tweets about the riots were from people trying to ensure that people stayed safe, or crying out for help amid the mayhem. So shutting down Tweets in a territory about a certain subject while on one hand may be seen as good can also work for bad when there are people trying to use the same language as agitators for the reverse effect. Who will be the arbiter of such decisions in the heat of the many thousands of Tweets that will undoubtedly be released at a key time that such action as suggested by Twitter will be called on? When did Twitter take on the Big Brother role from 1984?

Twitter are going what Google did in China, before they pulled out when there was outcry that they would bend their principles of openess to gain a foothold in China. Twitter are following the same course.

We the people of Twitter will not let our fellow Twitterati be silenced. To do that all around the world tomorrow thousands of Twitter users will fall voluntarily silent as an act of disgust. Last week to protest against SOPA many of us blacked out our websites tomorrow we will simply stop talking, on Twitter at any rate.
Posted by Stephen Glenn at 23:59