Last night I stayed up, almost to the end of the Caucus results in Iowa, it was 99% declared and at that point we knew it was going to be no more than 100 in it either way, but I just ran out of stamina and fell asleep. In the end Mitt Romney won by 8 votes over Rick Santorum both on 25% of the Caucus.

I was sitting there with 10 taps open in Chrome including two maps. One from WYNC spliting the various counties by demographic and Google's in which you could drill down to see the strength of each candidate across the counties. In fact at times Newt Gingrich had the lead in two of the northern counties simultaneously (Winneshiek and Mitchell), Michele Bachmann held an early lead in Howard County and Rick Peryy held leads in four counties at various times of the evening. I was following a number of live feeds from the Guardian and BBC here in the UK to several stateside including a Cover It Live forum, plus of course all my friends on Twitter, following either Iowa or the hashtag #iacaucus was just impossible there were more people Tweeting that Republicans who Caucused* in Iowa.

One of the tabs I did have open was the webcast from KCRG the ABC affiliate in Cedar Rapids, Ia, nothing like getting the information straight from Iowans who knew where the significant counties were, had reporters at numerous of the caucus centres including the 63 precinct venue at the University of Northern Iowa's, Dome.

There was one point early on before too many votes had been declared (about 7:45pm local time) that they said that there were people in England and Denmark watching them and saying hi on Twitter. So I did. The end result was within minutes Northern Ireland got a name check, and not for the first time but twice more as they handed over to different news anchors I got bundled up with the other two nations again. 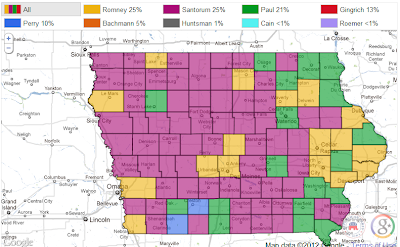 But these heat maps showing the proportion of the top two's support helps to explain the story. 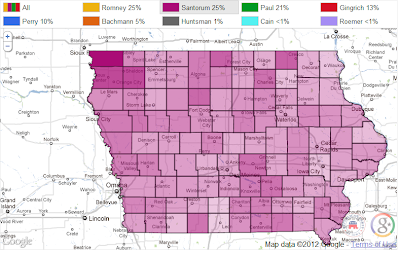 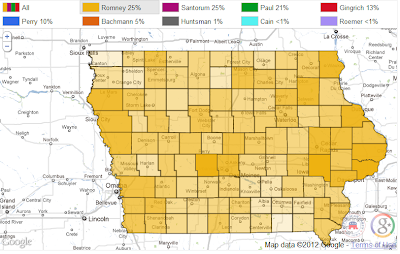 What this shows is that in the big metroplitan areas like around Polk County (Des Moines and surrounding), Iowa City and Cedar Rapids Romney scored a lot better than Santorum. In the western metropolitan area around Sioux City even though Santorum did well so too did Romney. In other words Romney did well in the urban areas taking most of the most populace counties. Santorum who personally was in each county twice scored well in the smaller counties where the personal approach obviously worked for him.

I think I shall try and do it all again next Tuesday for New Hampshire though I wonder if it will be as exciting with the former Governor of neighbouring Massachusetts being Romney. However, as the Iowa born Bachmann now a Congresswoman in neighbouring Minnesota can't come better than 6th here you wonder how long she will stay in the race. Already Rick Perry who actually came ahead of her is considering his future in race with Santorum appearing to take up the mantel of the Christian right.

Update as I was writing this Bachmann announced she was suspending her Presidential campaign.

* Yeah through the night I heard or saw this used as a verb extensively.
Posted by Stephen Glenn at 17:41