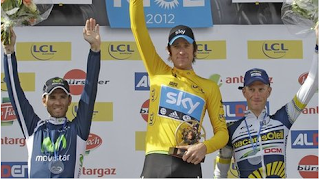 Last Autumn Mark Cavendish became the second Brit after Tom Simpson to pull on the Rainbow Jersey on the road. Today his 'new' teammate Bradley Wiggins did the same in Paris-Nice.

The Paris-Nice stage race is often seen as an early season warm up to the Tour de France and Team Sky can be proud of their performance this week. Wiggins came second in the opening Time Trail but took the lead at the end of stage two and has never been beaten.

On stage 2 in the win Wiggins found himself on the right side of a crash and in the small leading group. On stage 5 he attacked on the climb and although Vestra beat him to the line he had done enough to stamp his authority on the race. On stage 6 he found himself in a an early group that was allowed to get away along with Vestra, before 2/3 of the field came back to them.

But up against the clock today he beat Lieuwe Vestra of Vaconsoliel by 2 seconds to extend his lead to 8 seconds overall.

An impressive win and a show of the form that Wiggins is carrying at the moment
Posted by Stephen Glenn at 15:54