These were the final games to he held under the IOC Presidency of Baron Pierre de Coubertin how having held the role for 29 years stepped aside the year after the second games to come to his home city.

There were also the second Olympic Games to be held in France that year, the inaugural Winter Olympics had finished in the Alpine resort of Chamonix just 3 months before the opening of the Summer Games. There were officially at the time just a winter week of the Summer Olympiad though when a second week of winter sports became part of the programme in 1928 they were to be recognised as the first Winter Olympics. But the Winter Games are a different story and one I may tell in the lead up to Sochi and the XXII Winter Olympiad in February 2014.

This is Paris in the Summer of 1924, the Olympics of Chariots of Fire.


The motto translated as "Faster, Higher, Stronger" was first used in the 1924 Games. It had previously been used by a French sporting Federation one of whose members was Baron Pierre de Coubertin. It exemplifies the major aspects of most of the sports still in Olympics movement. Archery and Shooting present then and from the start not really fitting any of the three, but how does one add most accurate. 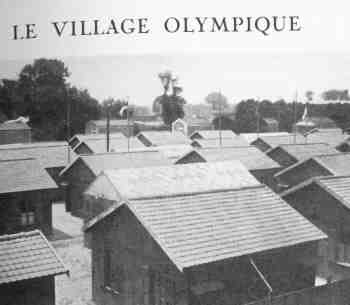 
The Games were now increasing to involve over 3,000 athletes never mind the officials and team coaches etc for them all. In past Games Olympians had had to book space in hotels along with anyone else who wanted to be at the Games. But in 1924 a new innovation came to the Olympics a specific village of accommodation to house the athletes and officials.

As you can see from the picture the accommodation then was rather basic looking cabins. But there were built close to the stadium and were the first to be termed Olympic Village. It wasn't replicated in 1928 but has been at every Games since 1932.

The newly independent Ireland were amongst the new teams taking part. So the taking part under protest and protests of the previous three Olympiads were now a thing of the past. They were not to medal in their debut, having had 'Irish' medalists in the past the closest they came to a medal was in the boxing, the event that they still have over half their medals in.

It was in the Semi Final of the Welterwight contest that the Referee Stopped the Contest to protest the Irish boxer Patrick Dwyer from the Argentine Hector Mendez, but he was unable to take to the ring the following day for the Bronze medal match which went to Douglas Lewis from Canada on a walk over.

Also present for the first time were Ecuador, Haiti, Lithuania, Philippines, Mexico and Uruguay. Latvia and Poland had both made their debuts at Chamonix in the Winter Games and sent teams to the summer as well. Poland would take a silver in the men's team pursuit cycling and a bronze in the individual show jumping, and Haiti would take bronze in the team rifle shooting.

Sports some goodbyes, some familiarity and some champions


Rugby made its last appearance in the Olympics as a full 15 a side event. It will be returning in Rio 2016 as a Sevens event. Polo was also making one of its occasional visits to the game, its fourth out of five. Tennis was also to make its last appearance from the early Games roster until it returned as a full Olympic sport in 1988.

However, there was standardisation of two disciplines. From this games onwards the length of the Marathon was set to the 26 miles 385 years that first was run at the 1908 Games in London. Also the Olympic measurements for a swimming pools were set to the now familiar 50m. In the past swimming had taken place in pools of whatever length was available or in open water in lakes or the sea.

Of course because of Chariots of Fire everyone knows that Harold Abrams won the 100m and Eric Liddell won the 400m. But did you know that they both contested one final together. In the 200m both qualified along with 4 Americans Jackson Scholz and Charles Paddock who were also featured in the film as losers to Abrams took gold and silver. But it was Liddell in bronze with Abrams behind in 6th. All three of the sprint disciplines were won in Olympic Records, Liddell's being a world record and Abrams running equal to the existing Olympic record of 10.6 secs in his QF, SF and Final.

But aside from the sprint guys who made the story of the Oscar winning film who else did well in Paris.

Well talking of films there was a future star fo screen and jungle doing rather well in that 50m pool. He took gold in both the 100m and 400m Freestyle as well as helping the USA to 4x200m freestyle gold. He would take a further two golds four years later but he also appeared in the USA water polo team which took the bronze medal. Eight years later and of course the sound of Johnny Weissmuller's Tarzan yell would first be heard on the silver screen. But then he was just a 20 year old American swimmer burn in what was at the time the Austria-Hungary Empire in what is now Romania in the town of Timişoara famous for being the seed bed of that countries revolution.

In the fencing there was a Frenchman, Roger Ducret, competing in his second Games. Having won bronze in the individual foil he went on to gold in his home games, adding to it the team foil and épée golds as well as silvers in the individual épée and sabre. He wasn't on the roster for the French team in the sabre the only men's event that the hosts failed to medal at in the fencing.