The Official poster for the Games (right) was designed by Jos Rivers, only 10,000 were made. However, the IOC failed to gain the copyright of this image and therefore ever since in their publications used a different poster (see below) that was first used in a German book about the games.

Since then the IOC have been more careful about the images and copyrights of their Games. As now the financial outcome of the Games were becoming important. As monitored by Los Angeles who had lost out to Amsterdam for 1928 but had secured the Games for 1932, there was US$183 million with receipts of US$1.165 million for a loss of US$18,000.

For the first time in the modern Olympics a flame was lit over the stadium for the duration of the Games, although the torch relay was still 8 years off.

The games themselves took on a 16 day programme of events rather than being spread out as previous games had been. This programme is largely the same as the one used today, with swimming dominating the first week and athletics the second with the other sports and new sports fitting into the 16 day schedule.

It was also the first time that the flag of Greece, followed by its team preceded all the competitors in the parade at the opening ceremony, noting the gratitude that Greece were was being the inspiration

New Olympic nations taking part for the first time in Amsterdam were Malta, Panama and Rhodesia (modern day Zimbabwe). Also after a 16 year absence Germany were welcomed back into the Olympic fold.

Seeing as yesterday was International Women's Day it is worth pointing out that Athletics and Gymnastics were finally opened up to female Olympians.

The women track and field events were limited to:


However, when several of the women in the 800m finished exhausted no running events of longer than 200m were to be run by women until the 1960 Games.

It was Halina Konapacka who would go into the history books as the as the first women's champion in athletics with a throw of 39.62 which beat her own world record before the games of 39.18. This was a whole 2.54m further than the silver medal athlete, Lillian Copeland of the USA, who would take both the gold and a new Olympic record four years later.

In the gymnastics the women were limited to an all around team event that was won by the Netherlands. Five of the 12 woman team were Jewish, four of whom Estella Agsteribbe, Anna Dresden-Polak, Judikje Simons and Helena Nordheim were killed in concentration camps during World War II. Agsteribbe at Auschwitz, the other three at Sobibór. Only Elka de Levie of the Jewish gymnasts in the team survived the war, though her marriage didn't.

Sadly they weren't to the the only Olympic team gold medalists from Amsterdam who would be killed by the Nazis in the war to come. The Hungarian sabre team lost János Garay, Attila Petschauer, who took gold in the saber (along with 1908 and 1912 sabre champion fellow Hungarian Oskar Gerde). 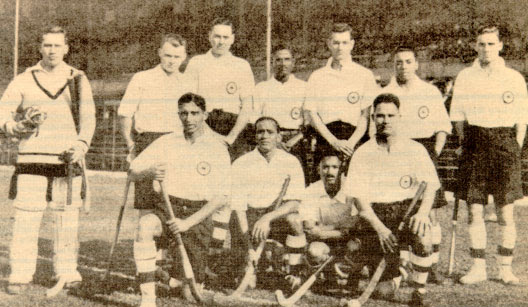 One of the great Olympic dynasties in team sport won their first gold in 1928. They dominated the tournament scoring 26 goals in their group with none against. Adding a 3-0 win in the final. Richard Allen pictured in his goal keeping leg defenders would concede one goal at the 1932 Games when he was off signing autographs in the games against the USA team, India did win 24-1 though. The following Olympics one further goal was scored against him, this is still a record of best performance by a goal keeper in Olympic history.

India would go on to win 6 consecutive gold medals in the field hockey but even in 1928 in the days of Empire they had a mixed racial team. Along with Allen, were Maurice Gateley, William Goodsir-Cullen, Leslie Hammond, George Marthins, Rex Norris, Michael Rocque and Frederic Seaman of European descent there was Dhyan Chand, Feroze Khan, Broome Pinneger, Ali Shaukat, Jaipal Singh, Sayed Yusuf and Kher Singh Gill from a variety of native races.

The other sporting dynasty that was to immerge to almost claim an event as its own was Hungary in the water polo. They only secured Silver in the Amsterdam pool, but there were to medal in ever Olympics water polo tournament from then until 1980, securing six golds, three silver and three bronze in the process.

Since 2000 there has been a revival in Hungarian water polo fortunes and they have secured the last three gold medals as well.