There is something in the air in Belfast at the moment two new sculptures have been unveiled this week. You'd think we were in the build up to some titanic anniversary or something.

Well the first was unveiled on Tuesday with a religious blessing, even if her nakedness did cause the Rev. Chris Bennett one of the Chaplins for the Titanic Quarter a bit of an embarrassing moment on BBC Newsline. He did however, eventually find the right words to describe her as in "all her glory". 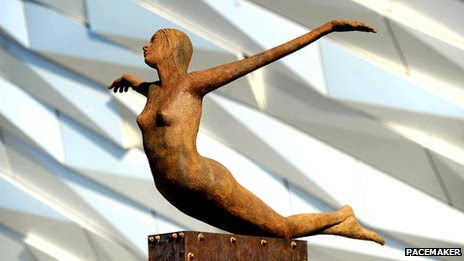 The second was unveiled yesterday by First Minister Peter Robinson, who is one of the MLAs for the area. This one was at Pitt Park and the backdrop is as much a part of the scene as anything. Called The Yardmen it depicts three ship yard workers heading home from Harland and Wolff with Belfast's iconic cranes in the back ground. 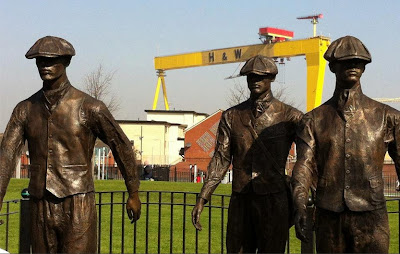 Even the new sign at Titanic Belfast and the building itself are works of art.

And that opens this Saturday. I'm intending to get there as soon as possible after to let you know what it is like.
Posted by Stephen Glenn at 08:03