In 1931 during the period of the Wiemar Republic, and two years before Hitler came to power, the IOC came to Germany to make the decision on who would host the 1936 Games. In contention were


Yet only two received votes Barcelona 16 and Berlin 46.

Therefore twenty years after they were due to host the summer Olympics, that were cancelled due to the Great War, Berlin was giving another chance to do so.


These were the first Games at which Afghanistan, Bermuda, Bolivia, Costa Rica, Liechtenstein and Peru participated. While none of them achieved any notable success the Peruvians were involved in a moment of controversy.

There was apparently a "crafty Berlin decision" that obstructed the Peruvian's passage into the semi-finals. Their football team was trailing the Austrian's 2-0 before the Peruvians scoring two goals back in the last 20 minutes and taking the tie into extra time, which the Peruvians won 4-2. Austrian players claimed that the Peruvians had manhandled them and that there had been a pitch invasion including one man brandishing a pistol. Basketball

Earlier this month the details of the 2012 Olympic torch relay were unveiled, although there had been a relay for the past two games we had not had a procession of the flame around the host country in the lead up to the opening ceremony until Berlin. Everyone talks about the person(s) who are the last to carry the torch on the relay, but what about the first person to carry it on the relay

That honour goes to Konstantinos Kondylis the Greek athlete who was handed the flame at Mount Olympus to take it on the first stage of what is now a well trodden tradition.

Also new in the 1936 was the way that swimmers started their races. Up until then they had merely dived in from the wall at the side of the pool. In Berlin the swimmers for the first time dived in from raised starting blocks poolside.

Handball was one of three sports to make its Olympic debut in Berlin. It is one of those sports that remains largely an enigma in the UK because we have so far never had a team take part in the sport; one of very few we have never taken part in (the others are Softball and Baseball).

In 1936 it was played outdoors and wasn't to reappear on the Olympic calendar until the Summer Games returned to Germany in 1972 in Munich and has been part of the Games ever since.

Canoeing also entered the pantheon of Olympic events in Berlin out on the Langer See in the South East of the city. Both the kayak (seated) and Canadian (kneeling) disciplines were represented from those first games. The events were: 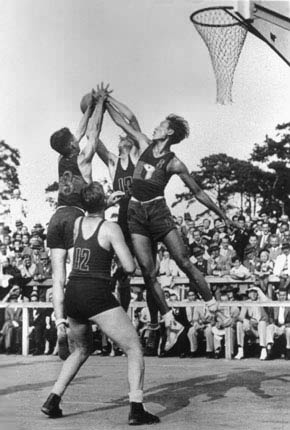 Austria topped the medal table with 3 golds all in kayak, Germany took 2 of the other kayak golds and Czechoslovakia 2 of the Canadian, the other of which went to Canada. Sweden took the final gold in.

Basketball was the third sport to make its Olympic debut in Berlin. Like handball although it is now played in an indoor arena at Games it was held outdoors at a converted tennis stadium. However, the sand and clay surface of the court proved as issue in the heavy rain during the final of the game. The players were unable to dribble in the quagmire of a court and the scoring was low. However, the USA did dominate and became the first champions beating Canada 19-8 in that rain affected match.

Joe Naismith who had invented the game some 45 years earlier presented the medals to the successful teams.

Soon after Hitler was elected leader there was always going to be controversy surrounding these Games. Jewish athletes were banned from sports clubs and from the team. So athletes like 4 time World Record holder Lilla Henoch (who missed out on 1924 due to the German ban) and Gertel Bergmann the national record holder in high jump were not selected.

There were calls for boycotts, the biggest of which was in the USA. Jewish organisations heavily wanted a boycott but the African-American press wanted the team to go feeling that the wins of top block athletes would shame Hitler's theory of Aryan supremacy. In the end though the team did go, some individual Jewish athletes did refuse to go. Bit more controversially Sam Stoller and Marty Glickmann the only two Jews on the 4x100m relay team were pulled from the event on the day of the final, some believe to avoid embarrassment to Hitler of Jews winning gold medals.

Spain however, did refuse to go. They even went as far as to arrange an alternative People's Olympiad which attracted interest from athletes from 22 countries. However, just one day before that event was die to start the Spanish Civil War broke out and it was cancelled. Spain like the Soviet Union would not take part in the 1936 Games.

But there was also the first medal winning Koreans, although because of the 1910 annexation of Korea by Japan they competed in Japanese colours. Both of them where in the marathon. The winner was Sohn Kee-Chung (competing as Son Kitei, the Japanese pronounciation) and in bronze was Nam Sung-jong (Nan Shōryū).

The pair Sohn from Sinŭiju in the North and Nam from Sucheon in the South when they turned to face the flags being hoisted bowed their heads in protest (pictured). Sohn would end up staying in the South up to and after partition of Korea helping develop athletes and was one of the carriers of the Olympic Torch in the stadium at the XXIV Games in Seoul.


Kristjan Palusalu of Estonia won double gold in the heavyweight divisions of both the Greco-Roman and Freestyle Wrestling the first and only time this has been done. Of course during World War II Estonia along with the other Baltic states of Latvia and Lithuania would be absorbed into the USSR, until 1992.

However, when the Soviet Union occupied Estonia in 1940 he was sentenced to hard labour. He tried to escape but with fellow escapees was captured and sentenced to death, however they were given a reprieve if they fought on the front lines in the Soviet war with Finland. But he and others deserted to the Finish side apparently shouting "Finnish boys do not shoot Estonians" as they crossed the line. He was recognised by a sports fan in the Finnish army. He was imprisoned but allowed to return to his homeland, by this point under German occupation. But when the Soviets came once again he found himself back in prison but this time was allowed to work as a trainer. As well as being recognised as a greats Estonian sportsman he is also a symbol of the Estonian struggle for independence. Sadlt his death in March 1987 came before the start of the changes in Eastern Europe that would eventually lead to the restoration on independence of this proud Estonian's nation in 1991.

See also:  This is a list of all my posts other Olympics
Posted by Stephen Glenn at 17:00