Today will be a strange day to be a bowler.

Later tonight at the last night of the church bowling club season I will once again be awarded a club championship trophy. Picking up and winning bowling trophies is something I have done since I was 18. I have actually been crowned a champion in three nations of the United Kingdom, but I also have been crowned a champion of Ireland, not once but twice and in the same tournament in consecutive years. That is why today is strange.

In 1998 I moved bowling clubs. It was a strenuous task as the new club's green was literally 2 metres from my old and current outdoor club, North Down. But the difference between North Down and Bangor while short in distance was miles in standard. Bangor were the best, not just in our league, nor indeed just in Ireland, but for the three years I played for them they kept producing outstanding performances in the British Isles championships as well.

I had in the 1997 season played third throughout the entire North Down season. That is the sort of position where you have to know how to play your bowls and all shots in order to assist the skip. I was playing third on the B team unable then to crack into the As. However, somehow I also managed to play third that season behind 8 skips! Yeah that is right someone who for most of the season played second was promoted to skip before I was that season and I wasn't happy. Not happy at all seeing as I collected three trophies in the club championships that year. First in one final, second in another and third in the scores for the rinks through out the season. I'd also managed to get to the last 16 of the Bangor Pairs tournament, skipping a pair with a Bangor player. Further than any other North Down player that week.

One player who watched all my games that week was Joe Mercer. He was one of the people who persuaded me to come play for Bangor. He said to me that I was too good to be stuck in the B team at North Down where seniority not merit was rewarded. So I did. I knew that Bangor's B Team would probably have beaten North Down's A Team at that time but because at that time the Northern Ireland Bowling Association (NIBA) was split into 4 Senior Divisions for the A Teams and 2 Junior Divisions for the Bs that was never tested. So I would have been happy just to make the B team. Even at second, or lead (which is not my most natural position but one I could play if asked).

So after the first selection meeting ahead of the first game of the season I went into the clubhouse more in hope than expectation to see if my name was on the team sheet. It was, and I was still playing third, and third to Joe Mercer. It was a position I was to hold more or less throughout the season, though I was dropped for one game, which I was raging about, merely it seemed to give everyone a fair go in the early part of the season. Joe took to me one side and said, "Don't worry Stephen I'll make sure you are back playing third to me next week", and I was, not just the next week but for the rest of the season. And what a season it was.

Joe and me couldn't have been more different on the bowling green. I like to shout and show emotion, Joe just quietly gets on with it. I can and will play all the shots from full on drives to delicate draws, through controlled weight and just enough to turn bowls. Joe liked to just be able to draw his two in to add to the score. But the combination worked well and Joe loved to be able to imbue his experience into the new generation of bowlers and that was something he certainly did for me. I do still shout and jump about on the green, but even if I appear to be losing my cool with my opponents that is also part of the show and I am zen like within, ready to calmly play my next bowl when it is due. That is a lesson looking at most of the skips I have had that I could only have picked up from Joe.

There are very few seasons when you can't say you wish you'd done better, but that 1998 season was one of them. Bangor's B Team only lost 2 games all year. One of them we still one 3 points for having 3 of the four rinks up, but the fourth lost but just one shot more than the rest of us could cover and in the other we lost by 2 shots but with 2 rinks up and two rinks down. We won the NIBA Junior Division 1 by some margin with the As winning Senior 1. On the Wednesday nights through the season we also managed to secure the NIBA Junior Cup in the final up at Ormeau while our A team were on the other green, but just lost. But there was something that Bangor Bs have never done before and that was lift the Irish Bowling Association Junior Cup.

Both team battled through the Irish Cup rounds but the As finally feel at the Semi Final stage, something we learnt up at Larne when we came off having secured our place in the Junior final. So we went to Carrick on a day much like today clear blue skies, no wind and the sun warming our backs. We were to play Limavady whose coach had broken down on the way. However, with both the NIBA trophies safely in Bangor for the third successive double we wanted to add the icing to the cake. Something that we duly did. The junior triple was ours.

The following year I started out playing with Joe once again, but mid season there was an adjustment in the teams. We lost one less game than in 1998, but sadly the one we lost was the NIBA Junior Cup. The following year we lost out in the same stage of the NIBA Cup and finally lost our Irish Cup streak in the Quarter Finals at the same venue and against the same opponents as the year before.

It was my first season at Bangor and it was the perfect season. I also added the Northern Ireland Civil Service Triples title to cap it off. Today was very similar to that day in August 1998, but today the mowed grass I saw was at the graveside of my skip from that day. Joe died on the day that would have been his 55th Wedding Anniversary two days what would have been his and his late wife Sylvia's 79th Birthdays. Bowlers from all the teams in Ward Park and former teams mates of Joe's turned up to honour the man who was ever present it seemed in the park, but always a quiet, courteous and friendly figure.

He will be dearly missed.


Did I say I'd be winner of one cup tonight? 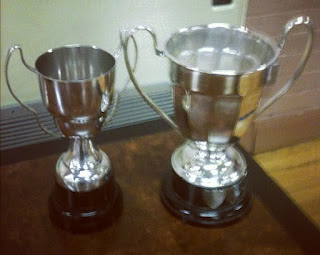 Turns out I was a double champion. On the right is the club championship (which I'd actually won in 1997) on the left is the one for winner the rinks, (that is getting the best 12 scores a max of one per week through the season).
Posted by Stephen Glenn at 14:54