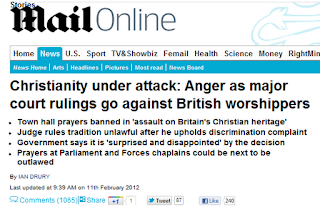 Seeing this mornings Daily Mail (paper edition) front page you would almost believe that David Cameron, or at least the personage of Ken Clarke in his role as Lord Chancellor had declared war on Marx's opiate of the masses.

The two stories that sparked the headline


Refers of course the case in Bideford Council and the failed appeal of Cornish guest house owners [both links to non Daily Fail coverage].

First lets us look at the ruling on prayers before council meetings. The Mail screams out that these are now banned. Here are the words of Mr Justice Ouseley who ruled on that case:


"A local authority has no powers under section 111 of theLocal Government Act 1972 to hold prayers as part of a formal local authority meeting or to summon councillors to such a meeting at which prayers are on the agenda.

"The saying of prayers in a local authority chamber before a formal meeting of such a body is lawful provided councillors are not formally summoned to attend."

Hang on  there! Far from being banned the judge said it was lawful to hold prayers before a council meeting. What wasn't lawful for requiring ALL councillors to have to attend.
If the calling to order of the council meeting occurs after the prayers are said and councillors who do not wish to partake in them have a chance to enter the chamber then no harm is done. In other words prayer is allowed, just don't force everyone to take part in it against their own conscious. Something that Christians also want to be allowed to do themselves.
The second, which happens to be the result of the appeal hearing, just happened to be delivered on the same day. It is the case of the Christian guest B&B owners who prevented a civil partnered homosexual couple from staying in a double room.
On this occasion we turn to the ruling of Lady Justice Rafferty.

"Whilst the appellants' beliefs about sexual practise may not find the acceptance that once they did, nevertheless a democratic society must ensure that their espousal and expression remain open to those who hold them.

"However, in a pluralist society it is inevitable that from time to time, as here, views, beliefs and rights of some are not compatible with those of others. As I have made plain, I do not consider that the appellants face any difficulty in manifesting their religious beliefs. They are merely prohibited from so doing in the commercial context they have chosen."

So here we have a judgement that says the the Christian owners had no issue in expressing and manifesting their beliefs, however they had entered a trade of hospitality. The point was made at the time of the judgement had they checked the marriage certificate of every "heterosexual couple" who had turned up at their guesthouse to book a double room. Their objection had been to the fact that the couple were not in marriage of a man and a woman and they would not let them share a room. One wonders what the report would have been if one of the 'of faith' civil partnered couples that I know had been the couple in question? Because then you would have had two potentially christian couples of differing opinions on either side of this debate.

In both cases there was no hindrance in worshippers actually worshipping. What there was however, was protection under the law for those that are not worshippers, or at least don't not believe the same as the worshippers in question.

If Christians want to maintain freedom of their religion they really must stop attacking others options to opt out of their belief system.
Posted by Stephen Glenn at 12:54