So why are we in London? And why are they now the 4th?

Last first the Intercalated games of 1906 (see last week's post) were at the time recognised as the 4th Olympiad, up until 1949 the position of the 1906 Games being in dispute. The former is because on 7 April 1906 Mount Vesuvius erupted devastating Naples and the funds that were designated for the Olympic stadiums and infrastructure were directed instead to that end. London stepped into the breach, not for the last time.

An introduction to the opening ceremony in London was the parade of athletes behind the standards of their nation. This was because for the first time competitors truly where there to represent their nations and not as individuals. The days of the mixed national teams in Olympic games were over. So around the White City Stadium paraded the flags of the 22 competing nations lined up with Greece to the front and the United Kingdom (as their banner says in the picture) to the rear.

The new nations to take part in the games were Turkey (who were represented by one Greek athlete Aleko Moullos in the Gymnastics), Finland (though still part of the Russian Empire as the Grand Ducky of Finland at the time) and New Zealand (though their three athletes formed an Australasia team with the Australians).


At the Prince's Skating Club in Knightsbridge on the 28th and 29th October a first occured for the Olympic movement medals were awarded for what are considered winter sports now.

Great Britain took the women's singles through Madge Sayers, who along with her 45 year-old husband Edgar took bronze in the pairs behind the German pair of Anna Hübler (Germany's first female champion) and Heinrich Burger.

There was another dicipline the Men's special figures, which went to the Russian Nikolai Panin (their first gold). He was a multi-sports person, taking part also in rowing, cycling, athletics and gymnastics. With skating not on the Olympic calendar again for 16 years in 1912 he took part in the 50m pistol coming 8th.


Hockey (field) also made its debut at these games. Don't tell FIFA but at the first London games along with France and Germany the hockey teams on England, Scotland,Wales and Ireland all took part. England beat Ireland in the final and Scotland and Wales each took bronze.

Jeu de paume (Real Tennis) made its one and only Olympic appear at Queen's Club it went to one of the two Americans, Jay Gould II, in the otherwise British field of eleven.

Rackets also made it only Olympic appearance at that other great Tennis venue the All England Club that will once again be hosing Olympic Tennis this summer. All the competitors were however British so I'll let you guess who won all the medals then. 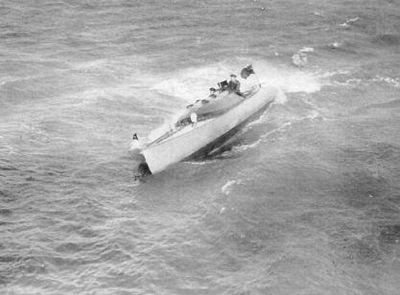 Water motorsports The London games were the only ones for which motorised sports are still counted in the medals table as three classes of motorboat raced in Southampton Water. However, in each of the three classes although multiple boats started only one in each completed the five laps of the 8 mile course. After these games the IOC stated that the games were not intended for motorised sport.

The marathon up until London had been a distance approximately the distance from Marathon to Athens approx 26 miles. But the race from Winsdor to the Olympic Stadium was meant to be just 26 miles, with the athletes using the Royal Entrance to the Olympic stadium before doing a 586 yard lap of the track. However, when it was realised that the Royal carriage would be blocking the Royal Entrance an alternative entrance was found leaving still 26 miles to the stadium, but a clockwise run around the track to a finish line made an extra 385 yards. In 1912 and 1920 the distance continued to vary, but from 1924 onwards the London distance became the official Olympic distance.

On a personal note a marathon has been run in London every year since that 1908 Olympic marathon. Even though the London Marathon only started in 1981 there was a continuous annual race organised by the Polytechnic Harriers (until 1999) the club of . My first brush with Olympic history was training on the track of Kingston Athletic Club and Polytechnic Harriers while at Kingston Polytechic (different Poly as Regent Street is now part of Westminster University).

These were the first Olympic games to be held in London, this summer the city will set a new record for hosting the most Summer Games. We've heard talk about the the legacy of the 2012 Games but what of the 1908 Games?

When a judge ruled that British athlete Wyndham Halswelle had been interfered with by one of the other finalists in the 400m there was a dispute as the definition of what deemed interference was different in the USA and British rules for running the event. The result was a rerun of the race, but the accused and his two fellow Americans refused to run. It meant that Halswelle had the only walkover win in Olympic history.

Following that event in the the greatest legacy of 1908 must surely be the establishment of standard rules for the sports that were deemed to be Olympic sports. Also bringing in judges from other countries other than the host. From here on all sports would be deemed to be judged impartially and a set of rules would be known for each competition. On top of this after the near death experience for the Games in St. Louis, London had given them high profile. Although they were still somewhat drawn out they were successful and as we know the movement has survived to this day.