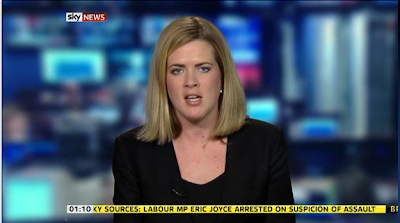 When Twitter lights up with the news that an MP you have taken on in debate has been arrested and in the Strangers Bar in Westminster itself, you want to have it confirmed. So it was that Sky News were the first TV news to confirm the rumours.

It appears the MP from the constituency next to the one I stood in, who I took on in two of the hustings for Falkirk, as agent, while the candidate was unable to get out of work commitments. Falkirk's Labour MP Eric Joyce, a former Army officer, allegedly headbutted Conservative MP for Pudsey Stuart Andrew. Apparently five policemen were required to remove the MP from the bar.

Eric has been in the House since winning the seat then of Falkirk West following the resignation of Dennis Canavan to follow his Holyrood career. It is possible in light of the serious nature of the events tonight that a by election may be the end of his political career 12 years on.

Update subsequently both BBC and ITV also confirmed the indentity.

Update 2: Labour have this morning suspended Mr Joyce from the party as spokesperson saying:

"This is an extremely serious incident. We have suspended Eric Joyce pending the results of the police investigation."

The Speaker of the House John Bercow also commented:

"Members will be aware of reports of a serious incident in the House last night. I have been informed by the Serjeant at Arms that the honourable member for Falkirk has been detained in police custody.

"The matter is being investigated. I take this matter very seriously, as do the House authorities."

However, early this morning many Labour supporters on Twitter why trying to spin a positive message out of the alleged common assault of a Labour MP on a Tory one.
Posted by Stephen Glenn at 01:19