In 1901 the International Olympic Committee decided that they would hold Intercalated Games every four years in the gap between the internationally arranged Olympic Games. There were to be held in Athens every 4 years. However, only one is ever staged, but if you have read my posts about the 1900 and 1904 Games the 1906 Intercalated Games may well have been the saviour of the entire Olympic movement. 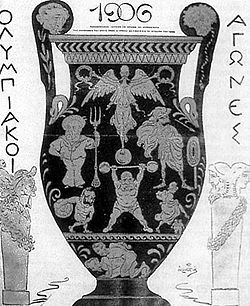 The games were referred to as the Second Athens Olympic Games for some time, they were later in 1947 designated to not have full Olympic Status, their medals don't count in the official Olympic table. However, despite them being the only Intercalated Games to have taken part as  a review of past Games I am including them today for a number of reasons. 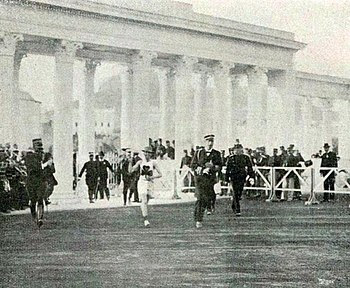 One of those winners was Canadian Billy Sherring of Canada who in the first occasion of acclimatisation for  an event lived for two months in Greece before taking the tape in the Marathon. Prince George of Greece was so excited about the achievement that he joined the Canadian for the final 50 metres (as pictured). It is not expected that his great-nephew the Prince of Wales will follow suit this summer.

Smyrna and Thessalonica both took part as separate entites in these games both the Greek cities being part of the Ottoman Empire at the time, taking a medal apiece. Smyrna took the silver in the football, while Thessalonica took the bronze. As a result result the Athens team representing Greece were knocked into fourth place as the gold had gone to Denmark (the ancestral land of the King and royal princes). 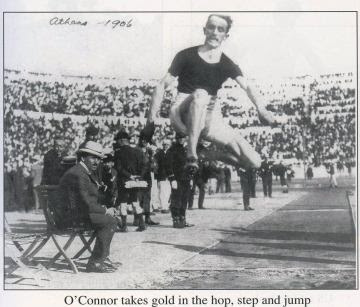 The first 'Olympic' protest also came in 1906 when Peter O'Connor (pictured) who won gold in the hop, step and jump and silver in the long jump. Though born in Cumberland, England he was raised in Wicklow. While Irish and American athletes guarded the foot of the flag pole, he climbed it to take down the Union Flag to replace it with a green one, bearing a harp and the slogan Erin go Bragh (Ireland Forever).

They may no be official Olympics but the 1906 were certainly a precursor to the stand alone games that we know so well. They were the only 'Games' to be in a year not divisible by four until the separation of the Winter Games unto a different 4 year cycle from 1994.

However, they deserve their place in the history of the Games for the 6 reasons listed above which they brought in which will still be present in London 106 years later. But have for too long been airbrushed out.

The medals awarded, which do not feature in the overall Olympic tables are as follows: