Dave paedophiles are not a subset of gay men

Update I was not going to post this until I saw this by Tom Chivers in The Telegraph and then heard the way this was reported on the evening news.

Phillip Schofield may have ambushed David Cameron with a list of suspected paedophiles on This Morning but it is the PM's immediate response that this somewhat startling.

"I am worried this could turn into a witch hunt particularly against people who are gay.


He did this without even looking at the names. Now if he was concerned merely about it becoming a witch hunt that would have been a fine response. But why did he add the caveat "who are gay"? Indeed until it was raised by David Cameron this morning nobody was linking the latest peadophilia with the gay community, there were a few individual cases but it wasn't so strongly linked.

The fact that the Prime Minister actually hesitated as soon as he said especially does seem to think that maybe his brain did try and catch on from his saying what came after he'd started with the caveat. Maybe his political brain kicked in, but it was too late he had already said especially. Where could he go after including that?

Not all of the victims of this high profile paedophile ring that are coming forward are male. But the linking of gay men to the accusation of paedophilia by being at the front (or indeed anywhere) in the Prime Minister's response does nothing to pull gay men away from the stigma and finger pointing that has historically been the case. It is often used by people opposed to any LGBT equality, especially the teaching of it in schools. Remember that Cameron himself voted for the retention of Section 28.

Does this 'slip' of the tongue actually reveal the true feelings of the Prime Minister about the LGBT community? Does the inclusion of this caveat actually reveal that he is not actually as comfortaable with LGBT equality as he would like for political expediency to make out.

One thing that is worrying is that by making this connection on national television David Cameron has actually thrown that image, that link back into people's minds. He may have tried to prevent a witch hunt but his misspeaking may very well have created one of his own.

Yes the speculation on the net about names can be a witch hunt, but that is not exclusive to one sexual orientation. The victims don't fit the narrowing of that definition of a witch hunt. So in mathematical terms this Venn diagram is not true. 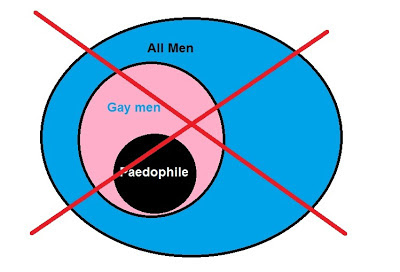 What we do know from case histories is that men and women, straight and gay prey on underage victims.

This is the actual representation of the issue, though not to scale. 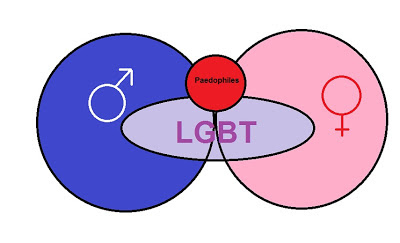 I spent a long time today musing over the rightness of posting this. As I said David Cameron was quite right not to support any witch hunt over the paedophiles that are being used. Indeed the news are highlighting not on the issue of the witch hunt but on it being about a witch hunt on gay people. Therefore my concern that more people will link paedophilia with homosexuality has as a result of Cameron's words already increased.

Thanks Dave for putting the positive message from the LGBT community back slightly all because of six words you did not need to include in your rebuttal of this issue. Having heard some comments from some of the This Morning audience while out earlier some people are talking about the link which isn't there already.

Whether he intended to or not, unprompted David Cameron went on daytime TV and linked paedophilia with homosexuality.  He took it too far and the response in some quarters will be a return to linking the two.

Update I have noticed that the comments this morning have given Nick Griffen something to rant about inaccurately (warning this is the only time I will link to a Griffen Tweet).
Posted by Stephen Glenn at 18:18