Looking at the OED in response to Cllr Brian Wilson 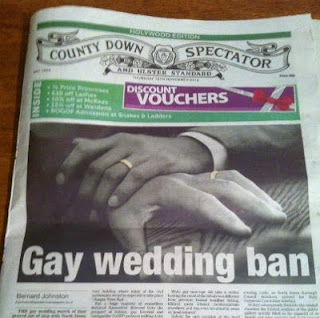 In this weeks Spectator (pictured) there is a report of the debate on Equal Marriage. One of the Councillors Brian Wilson the independent for Bangor West is reported to have said:

"the definition of marriage was not a matter for the council but for the compilers of the Oxford English Dictionary."


Now the OED is a fluid document and definitions there do get redefined all the time; marriage is one such word actually.

In older editions it was defined as:

marriage, n.
1a the formal union of a man and a woman, typically as recognized by law, by which they become husband and wife:

But by 1989 in the (second edition) there is a subtle but important change.

marriage, n.
1. a. The condition of being a husband or wife; the relation between married persons; spousehood, wedlock.

Note that the 'and' becomes an 'or' it is also extended beyond a formal union to include common-law husbands and wife within the wider definition as a result. But the or is important and does not imply that there is one of each gender required any more.

We move along to 2007 and we have a further revision:

1. a. The condition of being a husband or wife; the relation between persons married to each other; matrimony. The term is now sometimes used with reference to long-term relationships between partners of the same sex.

Apart from the final part of the main definition which is quite clear, there is another subtlety. The relation between married persons becomes the relation between persons married to each other. At this stage of course some countries and US States had already introduced same-sex marriage, therefore there is subliminal recognition of these unions.

Elsewhere in the same volume is another definition.

But the OED are not alone in recent version of the Merriam-Webster's dictionary marriage is defined as:

2: an act of marrying or the rite by which the married status is effected; especially : the wedding ceremony and attendant festivities or formalities
3: an intimate or close union marriage of painting and poetry — J. T. Shawcross>


So the OED and indeed other dictionaries have already redefined marriage. Why then did Brian Wilson not vote for the OED definition of marriage but instead called the motion on Monday a political stunt?