Went to the chapel and got asked about marriage 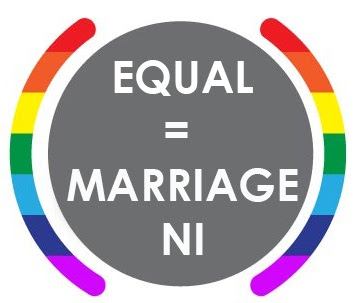 As some of you who follow my Twitter or are friends on Facebook (or read the last post) will know I have been away to a family wedding. Yesterday saw the culmination of my cousin Rachel marrying someone I had befriended on Twitter at least, and maybe on Facebook, before they were going out, Paul Burgin.

With England, Wales and Scotland it was delightful to be a single cousin of the bride and being asked if I had plans to be married from friends of both the bride and groom. Yes, in the word's of the favourite performer of the bride's father "For the times they are a changin'".

Well as the wedding was in England and all of the political activists (yes it was one of those sorts of weddings) knew about the forthcoming changes in legislation it was assumed that all would be fair an equal in a few years time. You see at the time of my father's funeral, Rachel, three of my second-cousins and myself who were all single made a promise to create some happier familial get togethers. We knew what we meant and the other four knew that at that point I could only dream of it being marriage for me.

The marriage of Rachel yesterday makes it three such events in the last three years, there is a fourth scheduled for next summer, so obviously there is no pressure on me the pressure is on me to keep up the run for 2014.

Now of course there may well prove to be one hurdle.

While I may be able in 2014, or even 2015 be able to marry the man of my dreams in England, Wales or Scotland I may not be able to do so here in Northern Ireland. Of course I have family here, am very proud to be from here. But on this matter the unionists don't agree with the United Kingdom.....yet.

There is a petition from Equal Marriage in Northern Ireland calling on the Minster of Finance and Personnel, for it falls under his remit, which says:

"I stand with the lesbian, gay, bisexual and transgender men and women of Northern Ireland, their family and their friends, and call on the Minister for Finance and Personnel to bring forward legislation which will end the discriminatory ban on loving and committed same-sex couples getting married. I believe that different religious denominations must have the right to determine which marriages they solemnise, that no religious celebrant should be compelled to conduct same-sex marriages and that the government must allow those faith groups who wish to conduct same-sex marriages to do so."


The petition was only started yesterday but has just passed the 100 person mark. Please sign and share and help give LGBT people anywhere in the UK the same equal marriage rights and not be subject to a postcode lottery.
Posted by Stephen Glenn at 23:57