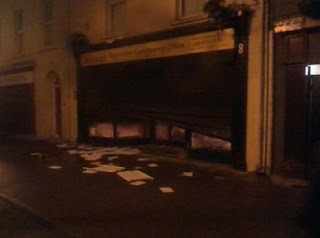 This is the scene tonight in Carrickfergus at the Constituency Office of Stewart Dickson MLA. He is the Alliance representative for East Antrim.

Stewart does not represent any part of Belfast, yet the protest against the decision made by the Alliance party to come with a middle ground between no flags and the status quo has not led to criminal damage being caused. There is probably outstanding case work that has been destroyed in the fire and Stewart will certainly be inconvenienced in working for this constituents while this mess is getting sorted out.

As Stewart has said:

"This is an outright attack on Democracy and cannot be allowed to continue."


The problem is that the DUP and UUP have been stirring up tension over the issue of the Union Flag at Belfast City Hall for a month. They dropped a leaflet into the protestant areas of East Belfast.

There are suggestions that they are using this issue to stir up support to regain the Westminster seat they lost to Naomi Long. But this protest has now reached criminal levels. There are calls nightly to met outside Alliance Constituency offices. Where are the calls from the DUP leaders or the UUP leadership for these attacks, because that is what they now are. This is no longer the threat against a Belfast Councillor but are not actual attacks.

Update No sooner had I blogged this that the DUP issued this. Although I think at the moment they should call on people not to protest outside Alliance Offices at all as there is too much tension.

UTV have published this picture of the inside of the office 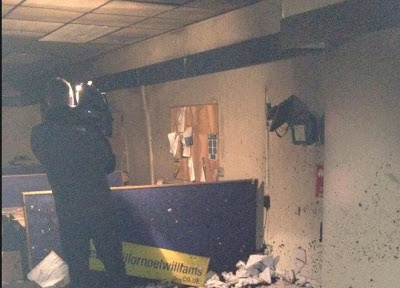 Further update My own Alliance Party Councillor, Michael Bower, and his wife Christine also a Councillor have now been attacked at home, where they live with their infant daughter. This indiscriminate targeting of any Alliance representative has gone to new levels this evening, this is terrorism and intimidation. And yes attacking peoples homes in the dead of night is a form of terrorism. 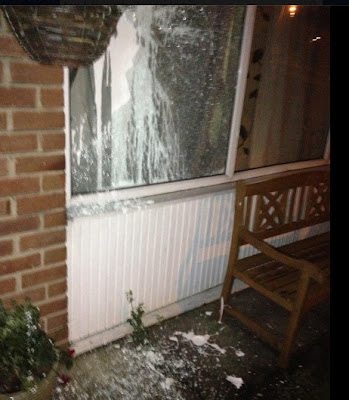 "My daughter who is 17 months old had just gone to bed when I heard an explosion against the window.

"I guessed it was some sort of attack on our family home. I checked that my wife and daughter were okay. The paint bomb hit the corner of the room where my daughter usually plays.

"There is damage to the window, but it could so easily have been so much worse. If events had been different, a young life could have been lost. I would plead with people to calm down and to stop attacking representatives doing their best to support their communities."

Even further update Police have reported that petrol or another accelerant were poured on the front of the Alliance Party offices in Bangor. A passing patrol disrupted their attempts at arson and no damage was done.