It's Easter let's show the love with Christians, unless they are Gay

As a Christian it should be the day that I am at my most joyful, even more so than Christmas. Today is the day that marks the day that Christ conquered death from when he died on the cross for us. 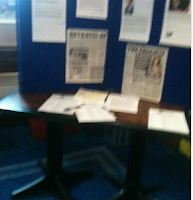 Yet today I'm not joyful. Today I couldn't enjoy the service of praise that we had planned for this morning. The reason is the picture attached (I apologise for the quality it looked fine on my phone). However, what it is was a petition set up in support of the Coalition for Marriage including several newspaper extracts that including this one (I apologise for the Daily Mail link) which is derogatory about our Equalities Minister as well as spreading some untruths.

I've spent most of this afternoon with family, including the annual Easter Egg hunt around the garden of the nephews' other Nana. But before lunch I had started to write an email to my minster pointing him among other things to minutes of the General Assembly of the Presbyterian Church in Ireland from 4 June 2007. Which said that:


Resolution 2 was then put to the House. For 159 against 120. The Resolution was declared passed.


That resolution was basically this paper on homosexuality (in full at the bottom of the article), you can see that there are some Guidelines which the minutes state:


That the General Assembly welcome the recent report of the Social Issues and Resources Panel regarding Sexual Orientation and authorise its publication as pastoral guidelines.


I have trailed every other minutes since 2007 and these Guidelines have not been rescinded despite some concern raised about how the Church of Scotland are dealing with LGBT issues at almost every General Assembly since.

I've not had a good day as far as Church goes. But have had some nice comments via Twitter and other means which I really appreciate. Indeed I very nearly set picked up my bass and walked out of the church before the service even began.

The email has been sent, rather than sending it straight away when it would have been angry it is more considered. But I do feel the need to pray about the future and where I can actually worship and receive pastoral care that is keep with what Christ, who has risen today, would have wanted.