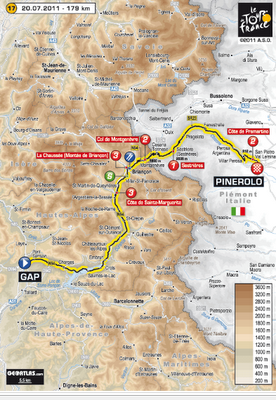 Today the 170 remaining riders in the Tour de France take a little excursion into Italy for an overnight stop. Although it will not be an easy 171.5 km to take them there.

There will ride out of Gap alongside the Serree Poncon Lake where the Embrunman Ironman Triathlon is held. These cyclists though would included swimming or running (we hope) in their disciplines today, or any other sport even though they will be passing a ski station.

There are two third category climbs either side of the sprint at Villar St Pancrace. Yesterday was the first time in the race that the peleton didn't race for the sprint points, as there was only two on offer due to the size of the breakaway. Look for that again a small break might well mean that once again Mark Cavendish, Jose Joaquin Rocas and Philippe Gilbert go head to head. It will the only chance that they will today.

The second of those third category climbs leads us to Briançon at 1,326m the highest City in the EU. But it is also the start of the first second category climb of the day up the Col de Montgenèvre. 7.9km to climb to 1,806m at an average gradient of 6.1%. On the downhill section we enter Italy on the way to Sestriere. 11.1km at 6.3% is hardly the hardest climb of the next three days However, in 1999 Sestríere was the stage of a mountaintop that Lance Armstrong destroyed the field to help make his first Tour de France win. On his second day in yellow in yellow on stage nine he put down a marker that he was going to attack in the Mountains and nobody could keep up. Maybe finally one of the leaders in this year's race can do the same

Armstrong's lead of 7'37" that year would current include almost the entire top 10 this year:
Of course once these ten get to Sestriere they have to go downhill from the 2,035m summit without the aid of skis. The main road from there for Pinerolo the finish is all downhill. But that wouldn't fit the modus operandi of this year's Tour. The is a little kick up the Prà Martino a regular feature on the Giro d'Italia, it is only a 6.7km climb at 6% but there is only 7 km downhill after that summit until the end of the stage. It means that the climb is shorter than the Col de Manse yesterday but it is steeper and comes at the end of a harder day. So maybe Alberto Contador will try again to get even more time back on the Schlecks. He may even start to attack on Sestriere after Andy's moans about descending yesterday. With a long descent then straight up the Prà Martino Contador could gain back some serious time. I expect though that Cadel Evans will be able to mark every move of the Spaniard again today. It may well set up a race between those two for the rest of the Alpine stages.
Posted by Stephen Glenn at 09:59