Day two in the Pyrenées is the easiest day here. If climbing the 19km western approach of the Col d'Aubisque easy.

Before the long slog up the d'Aubisque we have the minor issues of the Côte de Cuqueron and the Côte de Belair at 43.5 km and 65km. Both these 3rd and 4th Category climbs come before Bielle at 82.5km where the Sprint is placed today. As with yesterday look for HTC Highroad to lead out for as many Green points for their leader Mark Cavendish as possible before he drifts of the back a little under 10km later at the start of the climb up the Col d'Aubisque. 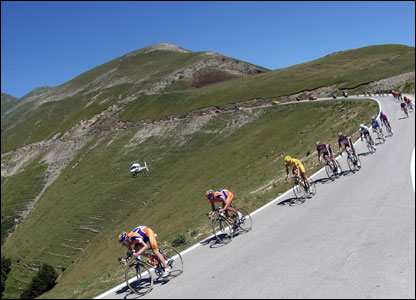 The d'Aubisque is the second most visited mountain pass in Tour history, only yesterday's high point the Col du Tourmalet has been visited more often. The western approach this year is from the other side to last year's approach, which came after the Cols des Peyresourde, Aspin and Tourmalet before ending up in today's start town Pau. Today we'll decend, with a slight ascent to the top of the Col du Soulor all the way down to the Pilgrimage town of Lourdes.

Cadel Evans will have good memories of the d'Aubisque in 2005 he was the first to the summit here. But last year a breakaway, including Lance Armstrong, climbed the d'Aubisque ahead and stayed ahead to the finish. If another group manages to do that today it could be a very similar finish, but what will the leaders in the GC do. Yesterday there were a few attacks. Basso attacked, the Schlecks did a one-two routine until Fränk got away to chase down the two leaders on Luz Ardiden, after the Leopard Trek team failed to break many of the top contenders off on the Tourmalet.


I think that Thomas Voeckler will carry on for one more day in yellow today, if he can ride like he did yesterday. The descent to the end will help him, don't forget he actually attacked yesterday on the descent of the Tourmalet. So no changes in Yellow, I think that Cav will contest whatever points he can in Green so no change there. The Mountains also without a Mountain Top finish doubling points is going to remain with Samuel Sanchez unless one of his main rivals summits d'Aubisque first and he is not placed.


So they will arrive in Lourdes relatively rested, though some of those who need healing are already out before we have another tough day tomorrow.
Posted by Stephen Glenn at 10:49